Recommended to those who enjoy themes of: Fantasy, Illusion, Mystery, and Romance

What if illusions became real, and existed in one of the world’s greatest circuses?

The Night Circus is a phantasmagorical (having the appearance of an optical illusion) fairy tale placed in a fictional Victorian setting. The Night Circus is a pretty accurate title; the plot is based around Le Cirque des Rêves (The Circus of Dreams) is only open from sunset to sunrise, and where everything from the tents to the performers are seen in shades of black and white. Acts in this mystical circus range from a female illusionist with no tricks up her sleeve, a contortionist with a mysterious past, an extremely accurate fortune-teller, redheaded twin cat-tamers, and many more impossible feats and sights.
Several decades before the idea of The Circus of Dream was even crafted two male magicians set their protégés (Celia and Marco), skilled illusionists with the ability to create mystical fantasies out of thin air, against each other in an extensive board game, merging the protégés’ lives with the infamous circus and each other.
I personally enjoyed reading The Night Circus; the mystifying characters and feats of phenomena are thrilling to experience. Morgenstern was able to create a novel that will leave bibliophiles breathless more. Elements of mystery, fantasy, romance, and illusion are well merged throughout the novel, giving the reader a sense that they’re experiencing a world different from their own. Containing a sense of fantasy without ever creating a weak or fluffy plotline, the novel maintains an intellectual atmosphere that even the most staid individuals would enjoy. The characters are interesting and meticulously detailed, providing the reader several different viewpoints and minutiae about this enigmatic, monochrome-colored circus.
For her first novel, I believe Erin Morgenstern was impressively able to provide her audience with a novel that will maintain their attention, if only for a few hours. 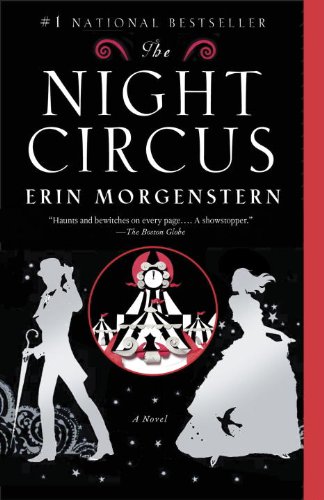