Th1rteen R3asons Why by Jay Asher

“No I can't believe it. Hannah Baker killed herself.
I hope you're listening, because I'm about to tell you the story of my life. More specifically, why my life ended. And if you're listening to these tapes, you're one of the reasons why.
What? No!
I'm not saying which tape brings you into the story. But fear not, if you received this lovely little box, your name will pop up…I promise.
Now why would a dead girl lie?
Hey! That sounds like a joke. Why would a dead girl lie? Answer: Because she can't stand up.
Is this some kind of twisted suicide note?
Go ahead. Laugh.
Oh well. I thought it was funny.
Before Hannah died, she recorded a bunch of tapes. Why?
The rules are pretty simple. There are only two. Rule number one: You listen. Number two: You pass it on. Hopefully, neither one will be easy for you.”

Clay Jensen, the main character, comes home to a shoe box full of old cassette tapes. He puts the first one in, and immediately discovers something shocking. The voice of a girl he used to know, a girl he used to like, a girl who killed herself. Hannah Baker. Her voice informs him that there were thirteen reasons why she ended her life, and whoever got the tapes was one of them. Clay doesn't know how he could have possibly caused Hannah's death, and thinks it must be a mistake. But Hannah says if the people who get the tapes don't listen to them, and pass them on, they will go public. So Clay listens, spending an entire night going all over town, following Hannah's map and discovering the horrible things people have done to her, and the truth about the people he sees every day. But what will happen when Hannah starts a tape with Clay's name?


Th1rteen R3asons Why is an interesting and attention grabbing from the first page. Once you open it, you can't put it down. I recommend this book to anyone why likes contemporary teen fiction or a fantastic book full of broken friendships, rumors, betrayal, and suspense 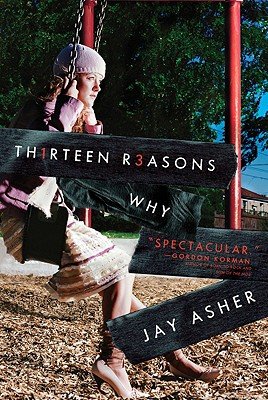 missswisskristen said...
on Sep. 13 2009 at 7:38 pm
It was a great book. It took me two hours to read it and i never stoppedfor a second. Its beutifully written, and though it is sad the ending is wonderfully thought of and told.
AddictingBook89 said...
on Apr. 23 2009 at 10:03 pm
This book is truely addicting and you really can't put it down it took me only 6 hours to read it. I wanted to know who was next. I feel sorry for clay because he truely did nothing wrong. He should have not been on the tapes. It almost killed him to wait for his own tape.