Sam is a fourteen year old boy who is in the eighth grade. He lives in London, England with his aunt and cousin. Crash is thirty-five, and Sam's father. Crash has just got out of the state prison and is looking for his son, and his fortune.
Sam is a new kid and he wants to fit in with the crowd. He wants to get in to his cousins gang. The gang decides that, if he wants to join the gang, he will have to do a very difficult task. He has passed the time limit for doing the task, but Sam doesn't want to change back into his normal self. Then things start to get a little out of hand. He starts going out with other guys from school, and wearing bras.
“Live your life as the real you, not someone else's version of what they think you should be.” This is the message from the book that reveals theme. It tells you that you should not be doing things that people want you to do just to fit in. Also that you should just be your real self so then people will like you for who you are not what they want you to be.
The things that make this book a good book is the way the author tells the story. When he was talking about when Sam was at the mall he told it as if the reader was there either watching them or through their eyes. This book also tells how a kid who does something just for him to fit in or just for other people to like him. But the way it is told it is like real life, because it is like if it is a prediction of what would happen if someone did something. It is like reality you don't know what is going to happen unless you do it.
This book makes the reader feel a little freaked out inside. The main character changes from boy to girl, left to right. This book is a little confusing, at first thoughts stat to go through the reader's mind that why is he still dressing like a girl longer then he had to be. What if the character had liked being a girl? He has some identity issues with knowing which one that he wants to be at school, and even out in public. This book is recommended to anybody who likes books that will make you see through other people's eyes. Maybe even people that like realistic writing, and who like books that are a little strange or out of the ordinary. Just for anybody in general that would want to read this kind of book. 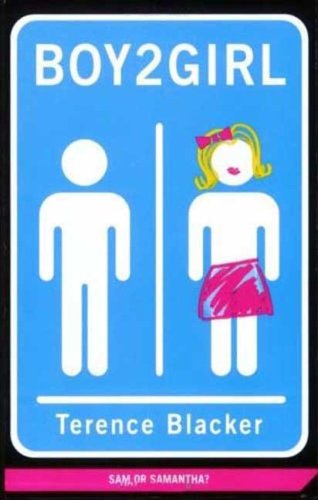