The Kids in the Hall | Teen Ink

The Kids in the Hall

“The Kids in the Hall” rocked my world in ways that are difficult to express through words. I typically describe them to others as “a Canadian Monty Python from the early ‘90s,” but in reality they’re so much more than that.

The Kids in the Hall started out as a comedy troupe performing live in Toronto, consisting of Dave Foley, Bruce McCulloch, Kevin McDonald, Mark McKinney, and Scott Thompson. As a troupe, the Kids present a unique brand of irreverent and subversive comedy, unlike anything I have ever seen before. I’m a bit of a comedy buff, so that’s saying a lot. Although the producer of the “Kids” television show was Lorne Michaels, known for producing “Saturday Night Live,” the Kids in the Hall are not even close to being like SNL.

The show is somewhat reminiscent of “Monty Python’s Flying Circus,” featuring sketches that are more quirky and surreal. A few examples of some strange recurring characters: the Chicken Lady, a human-chicken hybrid with an uncontrollable libido; the Head Crusher, a man who pretends to crush people’s heads from a distance; and the Sizzler Sisters, two insane asylum-escapees. The Kids tend not to do parodies or celebrity impersonations, preferring to create their own material from scratch. I feel that shows competence as comedians and as comedy writers.

“The Kids in the Hall” is actually pretty well known revolutionizing comedy. For one thing, the show regularly features gay-themed sketches. At the time the show was airing, which was the early 1990s, gay themes were pretty much never seen on television, other than maybe on some comedians’ HBO specials, being mocked. It was revolutionary to portray LGBT issues in such a light —not necessarily negative, not necessarily positive, but human. One recurring gay character that the show is known for is Buddy Cole (portrayed by openly gay Scott Thompson). Although Buddy is effeminate and fits gay stereotypes, he takes risks and speaks his mind, which shows real strength. Plus, he was one of the first (if not the first) recurring gay characters on television.

Another thing “The Kids in the Hall” is known for is the frequent use of drag in the show. The way that women are portrayed by men in drag is not the same as other comedy shows, though. It’s not even really a comedic device all the time. The troupe members are never winking at the audience about it. It’s not just, “Hey, look, a man in a dress! Laugh at him!” Men play characters that happen to be women. The fact that they’re men in drag is not the joke of the sketch, whereas in most sketch comedy shows utilizing drag, the point of dressing guys as girls is to get a laugh.

When it came out, “The Kids in the Hall” dealt with youth subculture in a realistic and relevant way, making statements about a variety of topics. Controversial issues were constantly addressed. The first time a condom was ever shown on television was on this show. Mocking big business and family units, “the Kids” is loaded with anti-establishment themes that youths (or at least I) can relate to, even twenty years later.

Each member of the troupe pulls his own weight. There aren’t just one or two guys that are funny and the others tagging along. All of the members are quite talented and entertaining.

I originally discovered this gem through clips uploaded to Youtube, then through DVDs. It is literally tragic that this show is largely forgotten at this point. It can be hard to find this show, but I know that all seasons of “The Kids in the Hall” are available on Netflix. I encourage every teenager, adult, and aspiring comedian to give it a watch. 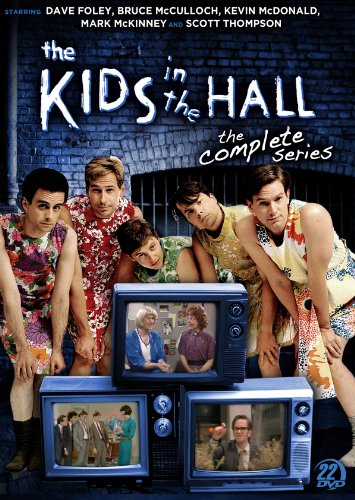 View profile
As of January 1st 2014, the Kids in the Hall are no longer on Netflix. RIP KITH!