Scott Pilgrim Vs. The World

Sure...putting up with a significant other's exs is rarely ever pleasing to do. For 23 year-old Toronto slacker and bassist Scott Pilgrim (Michael Cera), it's a living hell! Only after meeting (and making out with) the mysterious American Ramona Flowers (Mary Elizabeth-Winstead) does Scott come face-to-face with the League Of Evil Exs, a guild composed of Ramona's seven evil former relationships who wish to control Ramona's dating life. Can Scott "level up" and fight for the woman of his dreams? Or is it "Game Over" for their relationship?

Excusing my last two cheesy questions from above (couldn't resist), they should've at least hinted that this was a movie inspired by video games. Actually, this was a film based on a graphic novel series inspired by video games. A film that stayed mostly true to the original books and still excels where they differ. Director Edgar Wright (Shaun Of The Dead, Hot Fuzz) working with author Bryan Lee O'Malley does a fantastic job bringing this love note to classic video games to life. The casting was dead-on, visuals were stunning, jokes were laugh-worthy and the action was packed.

In the more common romantic comedies does the protagonist go toe-to-toe with their girlfriend's devious ex. Scott Pilgrim has to face 7, each more memorable and sinister than the last. To name my favorites: Chris Evans is just the right amount of c*ckiness to play Lucas Lee, Ramona's 2nd evil ex and famous movie star. Mae Whitman (who once played Cera's love interest on TV) is furiously great as Roxy Richter, evil ex no. 4. Jason Schwartzman plays one of the best s I've seen as evil ex no. 7 Gideon Graves.

Michael Cera does not fully change his typical nerdy awkwardness we've come to love and/or hate but does add a new level as he does handle the fight scenes very well and shows a believable determination in his eyes. Mary Elizabeth-Winstead is spot on as the aloof Flowers while showing some good sincerity at times about wanting to be with Scott. Ellen Wong was an excellent find as Knives Chau, Scott's former high school girlfriend who constantly tries to win Scott back through jealousy and blades. The real winner of the cast is Kieran Culkin as Wallace Wells, Scott's gay roommate and voice of reason. You're bound to laugh every time he opens his mouth or just appears on screen.

The visuals are really note-worthy for this film. Keeping up with both the graphic novels and games, words fly out for sound-effects, punches, hits, misses, and scores. The best culmination is seen during the battle of bands between Scott's Sex Bob-Omb and The Twins (Evil exs 5 and 6). The film as a whole is shown like panels the original novels and works well in creating a good portion of the laughs.

All in all, Scott Pilgrim Vs. The World is the video game movie most have been waiting for. It's not taken from any one game but rather as a few that helped shaped the video game world today and certainly offers the nostalgia of it all as one of its greatest interests. If you're a fan of video games, indie music, complicated romances, and/or Kieran Culkin then this is the film for you. 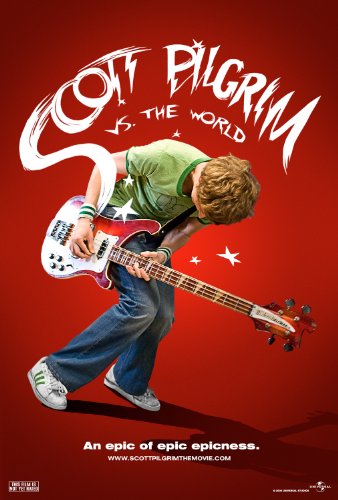 Favorite Quote:
"Life, It's the ultimate sin, a game with no rules that you're expected to win" (Kid Rock)

View profile
Its an amzing movie! I love Wallace!