You know I often wondered how people decided what to read in the days before book reviews. Word of mouth is probably the most obvious choice, but even then how are you supposed to accurately make a decision. One person might hate a given book while another might love it. Thank Jesus Christ, our Lord and Savior, for the advent of the Internet and the ability to view hundreds (if not thousands) of different opinions on one book in a single click. Thank Him that we can now compare and contrast pros and cons on our own! Unfortunately, the book I have to review today is much more con filled than pro. Though you may weigh this review against countless others, in my humble opinion, read this single rant and never care about either reading or thinking about reading this book ever again.

Who could the unfortunate victim be, you ask? Well sorry (ehhhh, not really) it’s John Corey Whaley’s Noggin. Who is John Corey Whaley, you may ask? Well, don’t worry, you’re not entirely out of the loop. A thirty-something originally from Louisiana, Noggin is only Whaley’s second novel, and let me tell you that for his sake I can only hope his debut was better than this.

Our story begins with an interesting premise, I will admit. Dear young Travis Coates is cut down at the tender age of sixteen by leukemia. Moving, and like I said a good start. The book then takes a bizarre and frankly compelling twist. Travis is lucky enough to be decapitated, and then to have his head reattached to a perfectly healthy body only five years later. The problem? A lot has changed in five years. From his parents, to his friends, to his school, everything seems really different. Question is how will he cope?

Honestly, this book did not start out bad at all. In fact, I kind of enjoyed it at the beginning. Like I said, the premise was original and the writing and structure seemed alright. Until it wasn’t. As chapter after chapter progressed the story got worse and worse until eventually in the final chapters I was so exasperated I both nearly through my Nook across the room and broke into tears of sorrow.

That is no understatement.

For preservation’s sake, I might reveal some more intricate parts of the book in these next few paragraphs so stop reading here and skip down to the rating (though I think you already have a pretty good idea of what it’ll be) if you’d rather find things out for yourself.

First off the dialogue, because that is what struck me first, the initial little bell in my head dinging that something might be wrong. The dialogue seems forced, all wrong, and often times pulls the characters out of character. Often Whaley’s characters say whatever’s on their minds, no matter if they’re portrayed as shy or timid or even just a normal person that isn’t all that outgoing. Characters spit out conversation like bullets from an AK-47. And not just one or two of the characters, but all of them. I can handle a fast-talking protagonist or even some of his sidekicks. I can’t read a book where every single person seems to be an extension in one form or another of that super-speed mentality.

Also with the dialogue, there were one or two occasions where characters would (as I said before) act completely out of character. For example, there was one part of the book where Travis and his dad are fighting about Mr. and Mrs. Coates’ divorce and they go from shouting at each other and making threats of never wanting to see one another again, to all of a sudden calming down and talking normally.

For illustrative purposes, the conversation went something like this:

Dad: We did this because we loved you Travis! We did this together, because you matter so much!

Travis: Forget it Dad! You’re a terrible human being! I can’t believe you did this to our family! I’ll never forgive you! I’m leaving now!

Dad: Travis, wait, don’t go! I have something to show you.

Minimal dramatization, I assure you.

Unfortunately the awfulness of this book did not stop with the characterization or even the dialogue. The stupidity and down right immaturity of several characters is put on parade page after page after page. For example, Travis’s father has been staying up and going out late at night. Suspicious, one night Travis and his girlfriend, Cate, decide to follow him, and see him enter a strange apartment.

You know what they freak out about? That the dad is having an affair. Now, normally I’d think along the same lines, but everyone the entire book has been building up the father’s credentials as a committed and loving husband. All of them say there’s no way he could be having an affair. I take their word for it, but apparently I shouldn’t because as soon as they see him enter that apartment all of them get depressed and assume that the dad’s in an affair. Why don’t they think the dad is doing drugs instead? Or dealing drugs? Or some other kind of contraband? Maybe the dad has a sick friend that needs help getting in to bed, and the friend doesn’t want to pay a nursing service. Maybe the dad has a friend that is out of town, and he’s watering the plants or feeding the dog or some other equally probable scenario. Bottom line is that all they see is him go into a mysterious apartment, and immediately jump to conclusions.

Another example of the said immaturity of some of the characters has to do with the major story arc of Travis attempting to win back his girlfriend, who is now betrothed to another guy. At first the idea is cute, and it makes sense because Travis has just come back and is desperate and wants things to be like they were before his head got chopped off. However, as the story progresses further, Travis learns absolutely nothing. Cate repeatedly tells him to cut it out. Eventually it all peaks with Travis proposing to the already engaged Cate, and then punching her fiancé in the nose.

While this last bit is more of a side note than a criticism, this novel is not politically neutral. From the eye rolling at devoutly religious characters to guffawing at Republicans and conservatives, John Corey Whaley’s liberalism shines through. This, I feel, does not allow for an objective viewpoint and observation of the situation.

In the end, I have to say that while the premise is an intriguing one, John Corey Whaley succeeds in butchering it bloody. From the unbelievable and unexplainable way his characters act, to clunky dialogue, to his political bias, this book is built as if by a grade school kid, and one who is not necessarily the sharpest tool in the shed at that. Noggin is not worth the read. 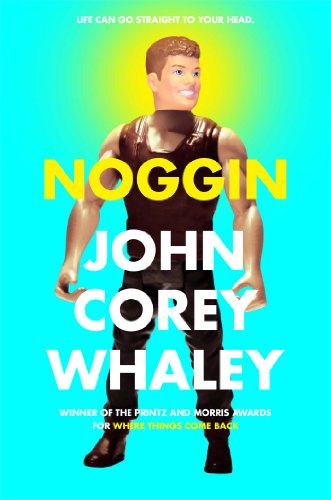 
Buy from Amazon
The author's comments:
This book is just one of many I’m reading as part of my school’s Battle of the Books competition. If you’d like to see the reviews I’ve written on other B.O.B books then take a look at my profile. Thanks!
Post a comment
Submit your own