Much Ado About Nothing by William Shakespeare | Teen Ink

Much Ado About Nothing by William Shakespeare

“Much Ado About Nothing” is a story written by William Shakespeare, who is famous for his dramatic works. However, Shakespeare also wrote comedies, and “Much Ado About Nothing” falls into that category. If you are like me, you can testify to how, in modern times, we can find the romantic aspect of most of Shakespeare’s works to be corny and irritatingly unrealistic. Some may even argue that that failing aspect makes his works not worth reading, even despite the beautiful language in which it is written.

“Much Ado About Nothing” is a story that mainly revolves around the couple, Hero and Claudio. The beginning scene is of several men, Prince Don Pedro, Claudio, Benedick, returning to Messina from battle. Claudio is instantly taken by the governor Leonato’s daughter, Hero. Perhaps the most comedic pair in the story is Hero’s cousin, Beatrice, and Claudio’s best friend, Benedick. Both are against the idea of love and rave on and on about how they will never marry. Beatrice, as a cynic, is too disgusted with the male gender to consider marrying, and Benedick, though loved by many women, does not love back. But as the story progresses, you begin to wonder whether their distaste for love will turn.

The main conflict that stirs up in the story, the drama, revolves around the hatred Prince Don Pedro’s half-brother, Don John, has for the Prince. Because he is a “bastard” son, Don John receives nothing, as opposed to his half-brother. Don John therefore sets up an evil plot to ruin Claudio and Hero’s marriage, as Claudio is a good friend of the Prince.

Well, I’ve read many Shakespeare plays, but after reading “Much Ado About Nothing”, it’s become my favorite. It was probably the comedy that won me over. Some of Shakespeare’s more dramatic works, “Romeo and Juliet” for instance, bored me and rendered me bitter regarding the naïve and eye-roll-worthy content. And though “Much Ado About Nothing” contains some of the corny romance, the comedic aspect and the characters made the story worthwhile overall.

The quarreling pair, Benedick and Beatrice, was my favorite. Beatrice especially, because of how unique her ideas regarding marriage were to other women of the 16th century. I found her character quite fascinating. 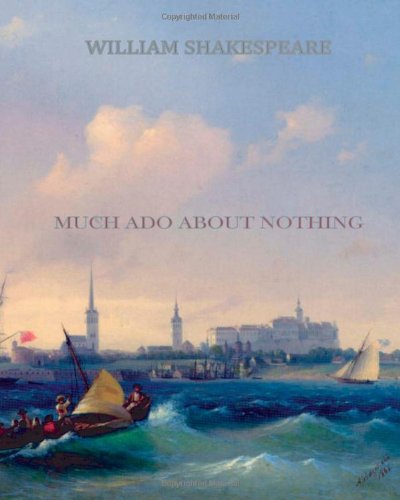