I know many people never like the author of this book.Some

of my friends told me if I wrote a review for this book,it won't get

published.But I want to remember a famous speech of Abraham Lincoln,"In every

a good one,we have to read it e so that we may know what is bad.Despite my

friend's advice to not to write a review about this book,I want to share my

experience about this book.

Mein kampf is an auto-biography book.It's about the one of the most dreaded

men in the humans history.The words in German Mein kampf means My struggle or

my
battle in English.This biography was written nearly ten years before Hitler

came in to power.In other words we can say the book was written before he was

know to the world as a dreadful person.This book was first written in German

and later it was translated in to many languages including English.

Hitler lost his dad before he become 15 years old.As a child,his dream was to

become a great artist,but he was rejected twice by the Academy of Fine Arts
Vienna.Another sudden pain came in to his life when his mother died in his

eighteenth age.He later went to Vienna as a painter,but he suffered most part

of his life
with out his mother.When he was in Vienna,he stayed in one house for some

days.Later Hitler joined in the army as a soldier in first world war.

I am not a Nazi supporter,but I feel there is some thing I have to learn from

not become a fan of Hitler,but I realized a fact that 'In any movement,any
thing can change'.I don't know why I shed in to tears many times,when I read

fight in life.He quoted,"Those who want to live, let them fight, and those who
do not want to fight in this world of eternal struggle do not deserve to

live".One of my desire is I want to live in a world with out war.But for

that,I think all the teenagers had to know what is war and what situations may

change a small boy in to dictator,so that we may not fall in those situations. 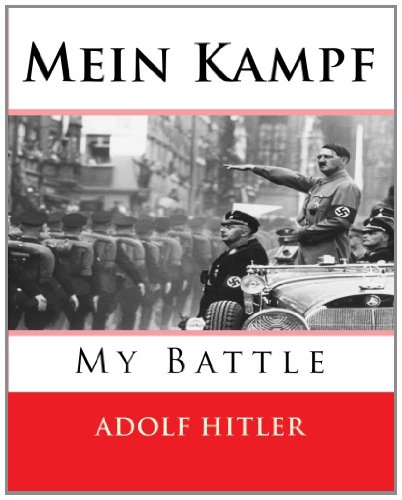 
Buy from Amazon
The author's comments:
I hope,my view is right....
Post a comment
Submit your own

Favorite Quote:
Let me not pray to be sheltered from dangers, but to be fearless in facing them. Let me not pray for the stilling of my pain, but for the heart to conquer it.
~ Tagore

View profile
Wow... Really makes you look at Hitler in a different light...