How To “Handle” Your “Teen”

Once in Health class I had to do a project on puberty, maturing, growing up, in other words “the teen years”. Upon starting the project I Googled the subject and found a standing army of parent advice websites, using words that seem to come from an appliance manual. “How to keep your toaster out of trouble”, though, is not something you will often Google. Your parents might though- after substituting “toaster” with “teen”.

Makes you wonder who reads those websites. Take for a perfect example the article with a plain and simple heading- “5 Teen Behavior Problems: A Troubleshooting Guide”. I did say these websites sound like they’re from an instruction manual from a kitchen appliance. Or worse- your apple iWhatever. At any rate, it seems that parents can’t make sense of their kids. Now, in this article, the criminal- oops I mean teenage behavioral mastermind outlines solutions to the following: “Your Teen Seems To Hate You”, “Communication Devices Rule Their Lives”, “Staying Out Too Late”, “Hanging Out with Kids You Don't Like”, “Everything's a Drama”. This article talks about parents checking on their kids- monitoring their Facebook or MySpace account, helping them even if their kids are acting like (pardon me) gits, and setting limits because apparently teens like limits. I find this article hilarious.

First off- monitoring? How long ago in history has that been made up and how long ago has the person being subjected to monitoring weaseled out of it? The two events probably occurred five minutes apart. Personally I don’t want my parents to watch me on Facebook and comment on my photos, etc. If they were actually there to communicate with others and network, it’d be okay with me but to basically spy on what I do on the internet- come on! You won’t believe it but kids are much cleverer than we let on.

About the cleverness- I don’t necessarily mean IQ or grades at school. I mean that most thirteen year olds know about pedophiles, kidnapping, rape, and other not very pleasant things that might happen if they are not careful enough. If they don’t know about it, then their parents probably aren’t parenting very well and their kids are unprepared for the world. Oh and sex? I knew about it in fourth grade, while one of my friends recalls knowing about it in preschool. No kudos to PG ratings. And of course forewarned is forearmed- parents can’t really save anyone from “internet predators”, they can only explain and hope that their kid gets it. No amount of reading will help your kid when someone in Chatroulette asks “wanna see my penis?”. (Just for the note, the solution is quitting talking to that person. And probably quitting Chatroulette because 50 percent of the conversations there will start like this.)

I’m sick of being referred to as a hormonal, emotional, over reacting “teen”. We all have our flaws and our good characteristics and there’s no point making a big deal of it. When parents realize their child is already thirteen, they go online and they read those articles which are basically prognoses of terrible changes ahead with lots of mood swings, tantrums, and drama from the “teen”. People are all different- some people skip the mood swings all together, some were born as drama queens, some become cardinally different when they leave home. We aren’t just “teens”- we’re human beings. Human beings with desires, aspirations, and preferences like any other human being. Parents should remember about preparing their children for the world, rather than making them obey rules and making them quiet down and making them controllable.

Parents say that they remember being teenagers- but there’s no way they would have dealt with things that we deal with today. Am I saying we as a generation are having it more hard than our ’rents did? I am not, just that we have a different setting and a different outlook. Parents can keep up with “trends”, technology, all the parent-aid websites they can get their hands on, but nothing beats simple communication and negotiation. It is, after all, forms the base of the parental business. 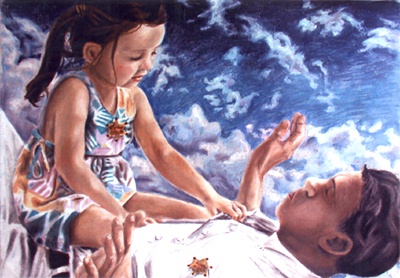 The author's comments:
Ranty and random. sorry if it's not fluent :)
Post a comment
Submit your own

Favorite Quote:
To love, to be loved. To never forget your own insignificance. To never get used to the unspeakable violence and vulgar disparity of the life around you. To seek joy in the saddest places. To pursue beauty to its lair. To never simplify what is complicated or complicate what is simple. To respect strength, never power. Above all to watch. To try and understand. To never look away. And never, never to forget.”

View profile
I think I have fallen in love witht this essay. It is amazing! Keep up the writing, you have a lot of talent!
pageturner PLATINUM said...
on Jul. 20 2010 at 1:16 pm
pageturner PLATINUM, Brooklyn, New York
34 articles 0 photos 94 comments

View profile
no problem. do you mind checking out my articles? So far no one has posted a comment. thanks
toxic.monkey SILVER said...
on Jul. 20 2010 at 12:34 pm
toxic.monkey SILVER, Tashkent, Other
6 articles 0 photos 210 comments

View profile
Too right, teens aren't computers. Adults can't program us, and they sure can't act like we have the same I.Q. as a bird.