The History of Roller Derby By Moaning Murder (A.K.A Helena Fox-Sellers) | Teen Ink

The History of Roller Derby By Moaning Murder (A.K.A Helena Fox-Sellers)

Joseph Merlin, a Dutchman in the early 18th century who liked the idea of adapting ice skates for dry ground by attaching wood wheels to a support plated attached to a ice skate boot Invented the first pair of roller skates. The first skates with metal wheels were made in 1763. The first modern skates, called rocking roller skates, which enabled a person to move quickly when a person shifted there weight were made in 1863 by an inventor named James Leonard Plimton who lived in America. Durable skates with ball bearings very close to what us derby folk use today were invented in the early 19th century.

Roller derby was first started out by man named Leo Seltzer, in the 1920s. In a Chicago diner drawn out on a napkin to have races on wheels on a tilted track and to describe the races it was named roller derby.

Here is an interview from the famous Loretta Behrens or better known as Little Iodine of the New York Bombers In 1959:
“Even though I was skating in speed clubs and at roller rinks, when I got on the banked track it was not as easy as I had thought it would be. Suddenly I was very clumsy and very unsteady on my feet. The banks are elevated at all different angles, and they made your skates want to roll into the infield. Consequently, you have to develop new muscles and balance to manage the banks. It took a few hours on those banks and slowly my legs would developed the feel and skill to be a little more comfortable. I found that at certain speeds and strides, you would not be fighting the banks as much. I began to adapt to the sport.”

The interview was taken from : http://moh.tie.net/content/docs/TheHistoryofWomensRollerDerby.pdf
I give credit to Kara Baumeister

In the late 1920s Leo started touring competitions to broadcast the rising popularity of the sport. Seltzer’s contest involved 25 teams, each with 1 male and 1 female skater. The goal, to complete 57,000 laps around the rink, roughly about the distance across the United States in 11 and half hours of strait skating, was alternating between male and female to give brakes and rest. In the 1930s Damon Punyon added the idea of evolving it from races to competitions with collisions and crazy hard falls with offensive and defensive skaters. There were now two teams now with five skaters on each team out on the track at a time, the jammer scored points by passing the opposing members. Skaters began to choose alter egos to appear fierce just like the modern roller derby name. Both men and women had teams but were now separated.

Roller derby first aired on TV in the late 1940s and continued off and on throughout until the 1990s with various changes. Leo gave his business to his son Jerry in the early 1960s. Jerry made alterations starting with the fights being more staged and less real but super exciting to the audience. When it became less popular in 1973 Jerry closed the roller derby business for he thought forever letting go the skaters that depended on him to make money.

Roller derby was then revived in the 80s and 90s like In a show called The Rollergames. A Figure 8 track instead of oval was added and crazy stunts were added and usually had a storyline, aired on TV. In 2001 the athletes themselves in Austin, Texas by the Austin Texas Roller girls, again revived roller derby again. By the 2010 there were 450 and more flat track roller derby leagues worldwide. In 2009 Whip it came out in theaters staring Ellen Paige based on the book Derby girl by Shauna cross, which I personally think you, should read if you haven’t. Derby is appealing to women because we get to show our strength, agility and speed that we haven’t before, like men but fishnet clad in our sexy uniforms. 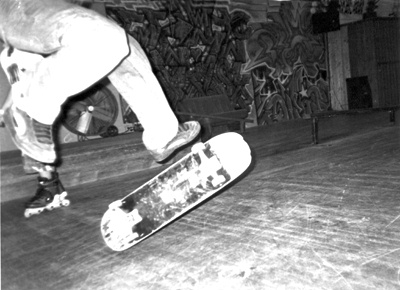 Favorite Quote:
"We accept the love we think we deserve." -Stephen Chbosky

View profile
Thanks for the information, I learned alot on this page. It was also good that you left a link and gave all the credit to Kara Baumeister in the interview. Also will all of your writings being about Roller Derby based on your username? Sublime job :^0