People often mistakenly define the roles professionalathletes are supposed to play in our society. Many have shown their generosity inhelping the victims of America's recent tragedies. We also know they help othersthrough clinics and charities, and some try to the best of their ability to berole models. But, is that their responsibility as pro athletes? It's great thatmany of them do the good things they do, but whether they choose to do them ornot is up to them, not me, or you, or the media.

Tiger Woods is a greatexample of an athlete whom society has tried to mold into a hero. When he firstwent on tour he made sure to show reverence to black athletes who had paved theway for him. He remembered the prejudices he endured as a child and has done hispart, whether vocally or just through his presence, to eradicate theseprejudices. He is also one of the most outstanding role models you'll find in prosports (if you exclude his on-course temper - he can't be perfect). He givesmoney to charities and sponsors clinics for underprivileged children, but to somethis still isn't enough.

ESPN ran a highly acclaimed documentary serieswhich included "SportsCentury: Tiger Woods." I enjoyed the show, butdisagreed with many of the people, both media and others, in their opinions ofwho Tiger Woods is or should be. I thought his father had the right to tell ofthe injustices Tiger experienced as a child, but I also thought it unnecessarythat he make race such a big issue. Tiger Woods is the greatest golfer of our erabecause of his game and accomplishments; not because he's black.

Therewere also members of the media who criticized Tiger for his lack of involvementin politics. Is that included in the job description for a pro golfer? They wentso far as to say that Tiger could never be a truly great man unless he wasinvolved in political matters. This is not their judgment to make. How can anyoneoverlook the positive influence Tiger has had on the world in, and beyond, thegame of golf? Whatever Tiger, or any athlete, chooses to involve himself in ishis prerogative, and his alone.

Political activity should notdetermine whether or not a person is considered great in the eyes of the public.Tiger's

generous actions in his short, but already prosperous, careerhave shown that he is a great man and what he does or doesn't do as far aspolitics are concerned won't change this. People, especially the media, need torealize how busy he is. They should emphasize the positive things Tiger Woods hascontributed to golf and to society. They need to focus less on what he hasn'tdone, and think about whether those things are really his responsibility as aprofessional athlete. 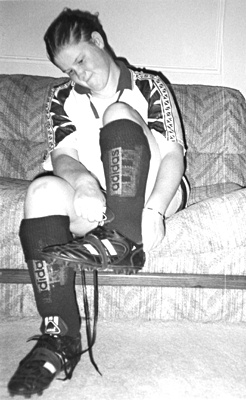