The men came in a truck that wheezed into the driveway. I went to the window to peek out, warry warry warry. The men that stepped sweating from the cab of the truck had the faces of parking lots: pebbly, cracked open, used.


My sister had went to find our brother, banging on the bathroom doors. “There’s people outside!” “People” had rhymed with “criminal.”


There had been talk of scams lately. Of men that were with the power company who insisted to come inside for a drink. “Then there’s a few things that go missing the next day,” our grandmother had said, “if you know what I mean.”


I watched the men tie bandanas around their throats and tug them up over their labored lips. Their faces – where the material didn’t cover – were colored dark with the earth. They pulled giant packs onto their backs, tubes running out of the top of them. They looked like the beetles with the dark green shells that gathered in herds in the morning grass at the start of May.


My sister and I, huddled close like raindrops, watched our brother speak to the leader of the beetle men on the front porch. His bandana was red and clung to the moisture on his face. I’ve never seen someone burdened with so much sweat. It tracked a map through the dirt of an undiscovered land, the ridges of his forehead. He spoke like a man unfamiliar with the language, reaching with words with an outstretched hand. My brother listened, nodding nodding nodding, with his back to the glass of the front door. His body awkward with the statement: “I am not yet eighteen.”  Behind them, the other men were converging on the trees of our backyard like a suspended ocean wave.


The man returned to his colony and our brother returned to us. His face a strain of “Dad’s not home.”


I bellowed out questions. Who. What. Why.


“They’re from Texas.” My brother shrugged thoroughly. “They’re working with the power company. They have to cut back some of the trees so they won’t touch the line. If that happens, we’ll get sued or something. The guy was hard to understand… They’re spraying poison or something on some of them that makes them wilt and slowly die off – like a vine but more effective. The branches will fall off…”


How horrible that sounded. How cruel.


I watched the men spray their poison, sweat their sweat, and return to their wheezing truck. Shoulders were stretched. Brows were dabbed. Their beetle-backs were stored away. Effective in their work, but tired of it. After they leave, I would step outside and breathe with my mouth and eyes open. I had sworn I could taste the bitterness of poison.


It has been a year. All the trees are dead. 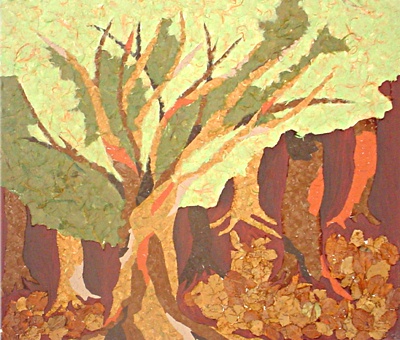