In the middle of the Great Hall sat Zeus, king of all gods, in an enormous throne of black marble decorated in gold. Next to him sat his wife, Hera, goddess of marriage and childbirth in a smaller throne, but none the less extraordinary. It was ivory with golden cuckoos and grape leaves around the top. The other 10 thrones stood next to them, five gods next to Zeus and five goddesses next to Hera.

Next to Zeus sat his brother, Poseidon, god of the oceans and rivers. His throne was made of grey-green white-streaked marble inlayed with coral, gold, and mother-of-pearl. Next to Poseidon sat Hephaestus, a son of Zeus and Hera. As he was the god of the forge he had made all of the thrones, and his was truly impressive. Made from every single kind of metal and gem that could be found it had all kinds of gadgets that helped Hephaestus to move around, since one of his legs was crippled by his father when he was a baby.

Ares, the god of war, sat of the other side of his brother. Ares was a gruesome violent god and was disliked by most of the others in the Hall. His throne was built of brass and was strong and ugly, with huge brass knobs the shape of skulls and a cushion cover made from human skin! On Ares’s right sat the god of music and poetry, Apollo. He was Zeus’s son with a lesser god. His throne was made from highly polished, sleek gold, with the back in the shape of a lyre and a python skin to sit on. The last in the row of gods was Zeus’s son with another lesser god, Hermes, the god of merchants and thieves. His throne was carved out of a solid, grey stone with a goatskin for a seat.

On Hera’s left sat Demeter, Zeus’s sister, goddess of useful fruits and grains. Her throne was bright green and was designed with golden ears of barley and little golden pigs for luck. Athena, the goddess of wisdom came next. Her throne was silver and gold with gold flowers adorning the top like a crown.

Next came Aphrodite, the goddess of love and beauty. Her throne was silver, like Athena’s, but inlayed with beryl and aquamarines, the back was shaped like a shell and the seat made from swans’ down. In Aphrodite’s arms lay her only daughter, Elena, fast asleep. On the other side of Aphrodite sat Apollo’s twin sister, Artemis, goddess of the hunt and young girls. Her throne was pure silver, with a wolfskin to sit on.

The last goddess was Zeus’s eldest sister, and the goddess of the home, Hestia. She did not sit on splendor as the others did, but on a plain, uncarved, wooden chair and a plain, undyed clothe cushion to serve as her throne. She was the kindest one in the Hall, and preferred to tend to the hearth in the middle of it.

The gods and goddesses did not speak or move now though. All twelve of there gazes were fixated on the big double doors that led out of the Hall: they were waiting for someone.

Or three someones. A few tense minutes of silence later the doors opened and in glided the three Fates Clotho, Lachesis and Atropos. The Fates were probably the most powerful of all the gods, for the Fates decided how long each mortal should live. They also knew what was going to happen to each of the gods and goddesses. For this reason all of the gods and goddesses respected and feared them.

The three tall goddesses went to the middle of the Hall and faced Zeus. Their voices filled the room as they spoke in unison.

“We know of an unfortunate event that will soon come to pass. We have known for some time, but now it is getting close. There is a old mortal man who is close to death, and with him all the gods and goddesses will go as well. He is the last of the old ones,” they finished dramatically and waited for some kind of response. Ares spoke first.

“Fools! We cannot die, we are the great gods and goddesses of Greece! We are immortal!” He did not understand, for he was not smart.

“You are correct when you say that we cannot die, Ares,” Athena moved to the front of the thrones, with the Fates, so that she could address everyone. “But we only exist because people believe in us. Have you noticed that we have grown weaker and weaker? That’s because less and less people believe in us. Sure there are people who study us, but they don’t believe in us. And now our last real believer is on his deathbed. When he dies we will all disappear. Not die, because we cannot, but cease to exist. Am I correct?” She turned to look at the Fates.

“Yes, you have explained it well, but surely this cant have come as a surprise. Some of the lesser gods have already disappeared because they were less well-known. You must have guessed that the same thing would happen to you in the end.” The Fates looked expectantly at the gods and goddesses sitting on the thrones. Most of them nodded, they had known this was coming.

“We have known that the end would eventually come, but we did not realize that it would come so soon. Thank you for telling us Fates, but can’t you do anything? Can’t you make this man immortal?” Zeus looked inquiringly at the 3 women.

“You think that we can change fate?” the Fates asked, their anger rising. “We only know the future of the gods. Once it is set we cannot control it. As for making that man immortal, we could do that, but it would not help. Once he is immortal he is a god, and there will be no more worshipers. The strings have already been cut,” And with that the Fates swept out of the hall. They stopped when they heard a female voice calling to them.

The Fates turned to see the beautiful goddess Aphrodite, hurrying towards them with her daughter clutched in her arms. The goddess was pale a shaking.

“What will happen to us?” she whispered “You must know, please tell me!”

“We will go to the place where forgotten things go,” said the Fates simply.

“But what about my daughter?” Aphrodite asked “What about Elena?”

The three Fates paused and looked at one another. They closed their eyes for a moment before they spoke. “We have seen her fate. It is not with you. She will come with us, we will take her to the mortal world and she will live with them.”

“She will not disappear?” Aphrodite let out a sigh.

“No. Now time is running out and we have to get ready to leave. Give us the child.” Clotho held out her arms.

“Please,” said Aphrodite, “tell the mortals her name is Elena Spiros. Elena for he light hair and Spiros after her father.” She kissed the baby and paused before handing her over to the Fate. Elena stirred a little, but did not open her eyes.

Tears glistened on Aphrodite’s face. “I have not known you long, little Elena, but I will miss you very much.” She turned and slowly walked back to the great hall. By the time Aphrodite had sat on her throne and looked out the door of the hall, the three Fates and little Elena were gone. 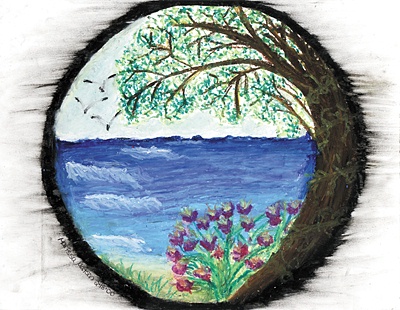