Echo concentrated on the mineral pool with her whole being. move... move... it rippled vaugly! yes! not exactly a giant swell lifting into the air and circling her, but it was moving! or maybe a glow worm disturbed a pebble... was she even sure she could move water? well, symphony could create fyre, so the opposite was water... she should be able to move it. or could she create it? no move it, because moving was the sorta opposite of create. and what could she do with plants? hard to say. she slumped and gave up.

she had stuff to do anyway. she needed to figure out what to do with the magic stuff. she really wanted to check the windrock, ut had a feeling it would do something it wasn't supposed to. stillll... well, she would be traveling thru the caves anyway.  she could stop at the plate first. she headed toward it and heard a vague sound... like crying. she went closer, staying behind a wall and stalagmite(mites are on the ground). yes, it was someone crying. a wolf, there was a small whimper and howl in it. it was soft, whoever was in there didn't want to be heard. it was in the chamber with the plate. possibly secret, she couldn't have taken being deposed well. she couldn't go in, an upset wolf standing to be humiliated might be hostile. when did she start thinking so technically? she did feel sorry for them... it also sounded familiar but distorted. possibly because of the howl. she really needed a way to defend herself, especially because all of the wolves weren't very impressed with her irritation a their stupid dominance fights. she doubted any of them would kill her... secret made it very public that echo was important, but they might snap t her unintentionally, or forget themselves and try to fight with her for dominance or something.

it would hopefully be safe to go in, but also rude and awkward. she did want to figure out magic and stuff... and the plate did seem like a good place to start... but somebody was crying in there.(oh what the heck sparrow. shes obviously going in there just get it over with. i know you're thinking that. and to you i say, eh, yeah. but also would you just barge in if you heard someone crying in a clearly private place? actually never mind, you probably would. so you're a weirdo for doing what i said you would probably do. shame on you.) she could always go someplace else... but her curistoty was burning... and just peeking to see who it was.... would be a massive invasion of privacy. so? they took away her privacy and made her live in a cave with 50 half human strangers who wanted to kill her. wellll that was the moon... but she really wanted to know who it was! and they never had to know! that was reallllllyyyy wrong and rude... but... she couldn't help it, and glanced around....

frost? wait, frost cried? nnnnnnn.... she really shouldn't do what she knew she was going to do... they weren't friends anymore. she didn't have to comfort her! or want to! but they were friends for like 10 years... she owed her that much. she sighed and walked in... but frost probably wouldn't want to be disturbed! to late...

"frost? are you ok?" echo sat by her, uncomfortable inside, but outside concerned. frost sighed and shrugged.

"whats-" dont you dare finish that sentence! "wrong?" ohhh of course you did...

"I'm just... so lonely. now that I'm bound and I'm alpha so i cant be myself around them and i dont know what to do, and you hate me, and the lions are probably going to start a war for some reason, and the pack doesn't trust me because I'm so young, and i dont know how to manage everything..." echo. dont you dare hug her.  echo hugged her, a tiny tear trickling down her cheek, and frost sort of smiled.

"at least... no, never mind. do you even have to be so dominant? maybe you'd be happier if you changed the social structure."

"you mean you'd be happier. what are you doing down here?" frosts mood shifted, and she pretended she was ok. well echo didn't know what to say besides that!

"i wanted to see what i could do with the plate."

"ok. do whatever you like." frost left. echo sighed and turned to the plate. she wasn't concerned! why would she care? she wasn't really sure what to do, so she just touched it. she shreiked as she felt herself pulled out of her body and into it. but not... there was just blackness, everywhere, and at the center a little white ball of energy, magic! but it was broken, flickering. she needed to fix it... how? wellll touching the plate had worked. shebrought her hand within an inch, the energy pulsated uncomfortably, and then it shocked her. she yelped and stepped back. what else? did she use magic? but what? there was no water there, or plants, or wind. she could probably create wind, by blowing, but that wasn't what she needed. but then this was another place, maybe magic worked diffrently.

she concentrated again on wind and felt a breeze. yes! she blew harder, faster, more directly at it and pressured it together. she could do magic! it wasn't done tho. it needed water. she didn't have water, but maybe... she focused on thinking water and some flowed out of her fingertips... ugh she felt dry. that was her water... oh well, she could drink more later. shepushed it out between the halves of the magic and it brightened. it was healed! and she did magic! and mad water fly! this darkness probably wasn't supposed to be here... how did she fix that? ahh! she felt herself pulled back into her body and felt eyes on her back. before she could turn, they were gone. she went back to her room and drank quickly, then went to the windstone. she wanted to touch it, but it wasn't broken. she could sense it. so she just sat there, staring contemplatively at it.

"hello echo." it was galaxy. her tone was awkward, though not cruel or gloating. echo turned, silently. she didn't want to muster the energy to hate her.

"will you leave if i answer?" she felt galaxy draw back in shock.

"you took advantage of me."

"China said he had spies who told him that if i died so did the moon. you knew that." she kept the same dull, emotionless face.

"i didn't! he would have been furious if he found out i helped you. i never told a soul."

"I'm already dealing with enough. i just don't have time or energy to hate you."

"why wouldn't you? the knowledge would be beneficial to you."

"letting you die would have been beneficial! i swear i didn't do it! i had no idea what he was talking about."

"Is there any way you would?"

"no. words mean nothing."

"im- no, you wouldn't believe that either. why would i have hidden you if i was going to tell dad that you needed to be killed?"

"see. all the more reason to tell him."

"i hate him." her voice held all the fiery passion of the sun, but echo didn't care. good acting.

"did you say you would leave if i answered you?" galaxy hung her head and left. echo turned back to the windrock silently. she didn't cry, inside or out. she just felt a vague numbness that she had been feeling for a bit. after an hour of puzzling about the windstone she figured she should work on magic, and what better magic than wind at this point. she concentrated and worked at it like she had in the plate. it was so much harder here! but she did feel a breeze, her breeze! she did it!

she headed back, too tired to keep doing magic. that breeze drained her.

"echo!" frost called her instantly. urghhh she was exghausted.

"no. i wanted to tell you, whatever you did with the plate keep doing it. it's so much more controlled and exact. there are weathers i didn't know existed. and it's so much more powerful, i can reach farther, the poles are so much more accessible. i can make them habitable if i wanted."

"yes, you'll see i left you a bow though. id like you to practice with it, because you're the only one who couldn't defend yourself or actively fight with the lions. besides, if for some reason we can't hunt you can get food."

"alright... goodnight..." frost let her go and she slept for about 10 hours, dreams laden with reminders. she still needed to fix the magic in the first place. 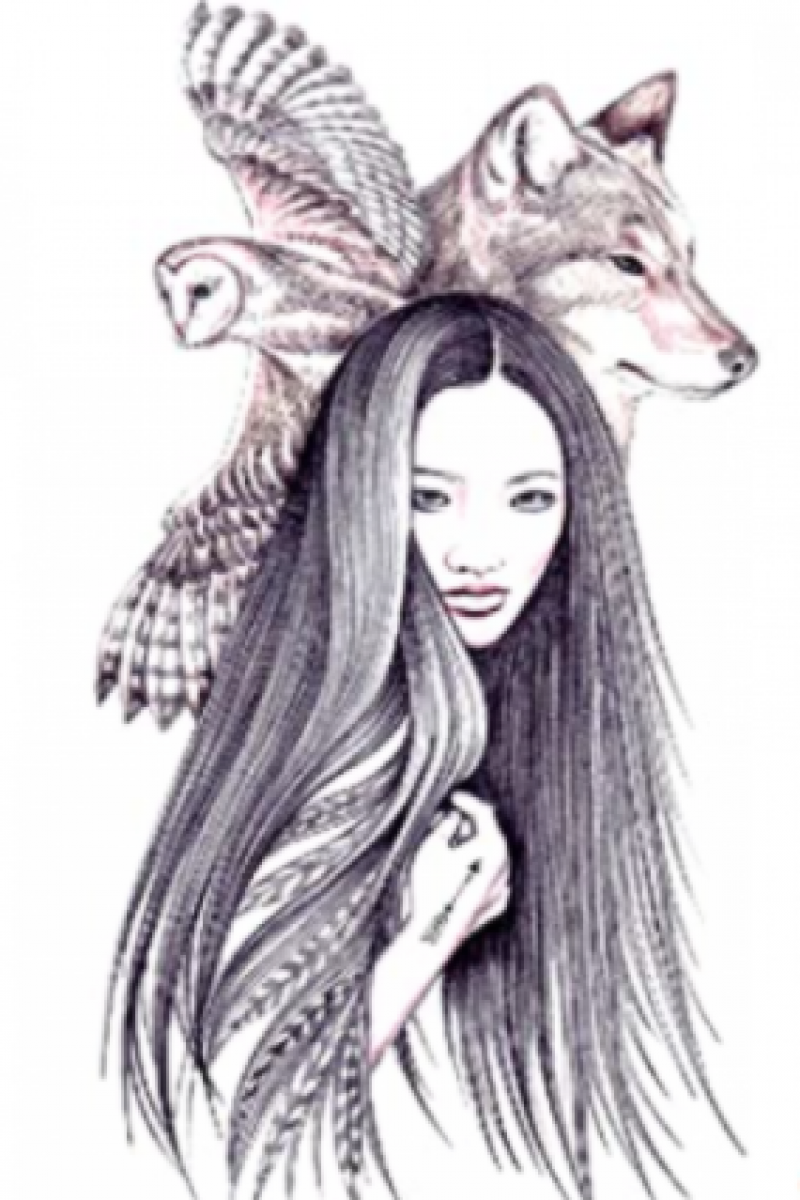