The choking pain grew deeper and deeper on that starry night of November 19th. Now, what was ever said or to be done would make no remorse. She took unfathomable gasps of air, trying to rid herself of the bitterness inside her. Who was she to go to…Her family? No! They would laugh at her. With their horrid eyes and their down spiraling impressions…they would laugh at her. They would tell her she should have never fallen in love. Her family was out of the question. What about God? She talked to God all her life about meaning and the mysteries of the abyss. Would He help her with her own mayhem? She dwelled on this idea. “God, am I wrong? Do I keep still and wait? Will this too pass?” How was she supposed to ask God to send her love back from sea? God never sent him away! He’s leaving… He’s setting sail in search of someone better, more gratifying. How could he? How could GOD? Though she tried blaming the others, she knew that she was the true one at fault. Her quick temper and ultimate misfortune led to something that would unconditionally haunt her.

She sat on the wooden swing that overlooks the sea. She stared at the stars while wondering if God will redeem her love and her. It was cold and grey, as was her heart. She heard a crunching noise that came from footsteps in the sand. She dared not to look back. She knew. He nonchalantly sat down beside her.
He looked at her and saw the hurt in her face. It grew on him the longer he starred. He stopped…he couldn’t handle her pain. His thoughts were scattered and unsure. What he had was not what he wanted... He wanted something better. But how was he to go about telling her this?
She resided in his warmth. Oh, how she just wanted to release herself and hold onto him before he was gone. It was too late. Desires such as these were never to be fulfilled. They finally looked at each other. Eye to eye: the worst confrontation ever.
Her eyes said “I love you”.
His said, “I know.”
He explained to her that his feelings were elsewhere. His love for her is still there but his desires are beyond the small realm of Pennual. She only heard a broken promise and a hopeless future that lay ahead.
Oh the pain and agony that ensnared her and grasped her very soul; her only friend…her very love. “E tu Bruté?” her heart said to his…yet no response was to be heard.
“Then Caesar fall…” was her heart’s mournful response...
Days went by as he sailed away. His transatlantic dream was at hand, but why did he feel so empty..So desolate…So unfulfilled? “I loved her. She was everything to me. My only thoughts and actions were for her! Yet she faded, her heart was lost in the sky… I don’t know what happened. But she didn’t want me like I wanted her…I desired her. I never wanted to break my promise but something had to stop.”
More days went on as he arrived to the New World. He looked for something extravagant, adventurous, and dreamy. But here, it was nowhere to be found. His heart was stuck in Pennual, with her. A year went by and his pain grew even deeper. At night, the remnants of the memories they shared together filled his thoughts. Their nights of excitement and their days on the shore…it was beautiful. He wanted to stay there…
“Why did it end up like this, God? I loved her!”
Then the still small Voice that stood by him all his life, the Voice that protected his mother all these years, whispered “Go, tend to her…tend to my lamb.”
“But I can’t, we are no more… we’ve gone different ways…her heart is somewhere else.”
“Go, tend to my lamb. I will redeem you for I AM the Atonement.”

Day by day she sang by the shore, praying that he would come back to her. Questions ran through her head every second…”Why God? I thought you promised…. I thought He promised…. Will I get over this? Will my love for him go away? You said love is everlasting…”
“Be still”
“I can’t God!!! I need him!!! I haven’t slept for days!”
“Be still, and know… For this too shall pass. Behold! I AM.”
Another year rolled by but in the beauty of time and space, God placed them together on the dock of Pennual. She went in search of restoration; He came back in hopes of atonement. With wide eyes and hearts filled with regret and pain, they embraced what was most beloved; Each other. They filled each other with promises that would last for a lifetime, but this time was different. God had redeemed what was broken and faded. He brought them together again to fulfill His Will for their happiness. The Atonement of their love. A love that brought life through a cold and grey world. A love that would endure forever, the strongest of them all. 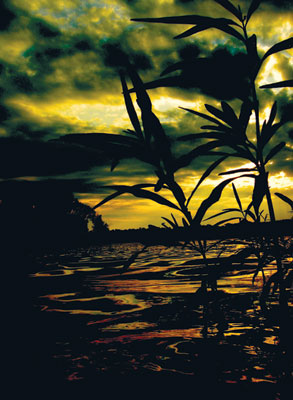 The author's comments:
I wrote this fictional piece as an atoning love story in both human and God. I hope the reader will understand that through many struggles and hardships that life brings, "this too shall pass..."
Post a comment
Submit your own