Anthems For the Imperfect by Everyday Sunday | Teen Ink

Anthems For the Imperfect by Everyday Sunday

"Anthems For the Imperfect" is the 2004 release from hit, Christian rock group Everyday Sunday. "I Wish I Could Say" starts this album off on an energetic foot. "Bring It On" starts off very guitar based then brings in the other instruments to create the band's unique sound, which includes a fun sing-along feel in the chorus and an awesome guitar solo to boot. "Gypsy Girl (What Love is)" starts off kind of slow then totally picks up the tempo in the chorus. "I Won't Give Up" slows things down to create a great power-ballad with a well-done guitar solo at the end. "Something" is a lot edgier than other Everyday Sunday songs and brings a great, danceable, rock edge to the record. The great thing is that the lead singer's voice doesn't get lost within all of the edginess and effortlessly stays at the front of the mix. "Herself (I Want a Girl)" brings you through a story that's presented very clearly through the lyrics, and really shows how great the guys are at expressing stories through song. "Freshman Year" is totally danceable and just fun to rock out to. "Comfort Zone" keeps up with the energy that's been going through most of the album and just escalates that a little bit more to create an awesome, good-time sing-along with a great guitar base as a bonus. "To the Skies" starts off with some guitar riffs to create a good feel that goes into a more steady beat. Then, the riffs come back for the chorus to invent an unique beat with unforgettable lyrics. "Star of the Show" is another fun, happy-go-lucky jam that's all about following your dreams. "Untitled, Anonymous" slows things down a little to make another greatly done power ballad that mixes the eletric guitar with the heart-grabbing sound of a violin; this goes to a whole other level during their solo section. This sound also builds as the vocals build around the end of this beautiful song. "The One" still keeps up the beautiful ballad feel that the last song demonstrated. This time a piano is the strong basis with the vocals soaring over the piano and violin, making a sweet end to an awesome album.

Once again, Everyday Sunday has created another great album that's the perfect addition to any fan's collection. With it's high energy, thoughful lyrics, and stand out vocals, this is a great album for anybody. Don't forget to check out their awesome music video for "Wake Up! Wake Up!" Also, be sure to check them out on facebook and twitter to find out if their doing a concert near you. Trust me, you don't want to miss it. Enjoy! 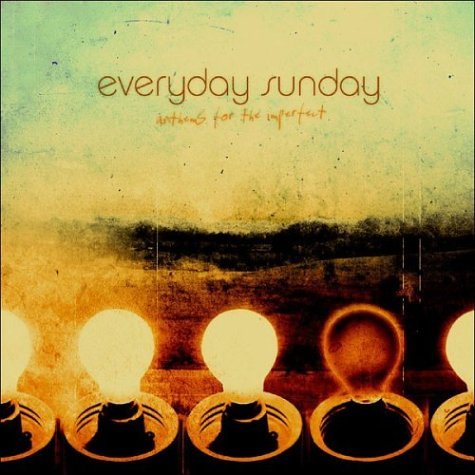