Favorite Quote:
"Be the change you want to see in the world"
------Ghandi

Danny Pope (River Phoenix) is a seventeen year old piano prodigy who has been running from the law his whole life. His parents (Christine Lahti and Judd Hirsch) blew up a Napalm factory in protest to the Vietnam War, accidentally blinding and maiming a janitor. Forced to live with the consequences of a crime he never committed, Danny has grown accustomed to a pick-it-up-and-go lifestyle, leaving everything behind (including his name) at the drop of a hat, his music being his only sense of solace.

But when the Popes reach a new destination, Danny seriously begins to think about his future. His talent amazes his school’s music teacher, who wants Danny to go to Julliard. He falls in love with the daughter of this music teacher,  the outspoken Lorna Phillips (Martha Plimpton).

When his parents want to leave the only place he has ever been truly happy in, he faces the only decision he has ever made on his own: should he go with his parents and abandon his future or stay and leave everything he has ever known behind?

The character of Danny Pope is one that touches your heart. His emotional vulnerability is illustrated beautifully, all of the pain he has experienced over the years truly molding this boy into a compassionate and loving individual. He is not without flaws; his sensitive and empathetic nature also cause him to be submissive and guarded, fearing attachment to anyone besides his immediate family. Although he is a damaged person, you connect so deeply with his character on screen, and feel the anguish brought on to him by his parents. Your heart will ache along with his, and you will cheer for his future as you see the goodness in his soul.

The relationship between Danny and Lorna is one in which they truly benefit one another. Lorna is Danny’s opposite: she is fearless, says whatever is on her mind, and is also the epitome of the ungrateful teenager, often complaining how “nice” her parents are. Lorna teaches Danny to be brave, honest, and fight for what he wants, causing him to gain a new feeling of self worth. Danny teaches her to be more sensitive, understanding and empathetic, and not make judgements so quickly.

While not a blockbuster hit, Running on Empty is a work of art. Showing one boy’s journey of self-discovery, this movie reveals that even through hard times, love and honesty always prevail. 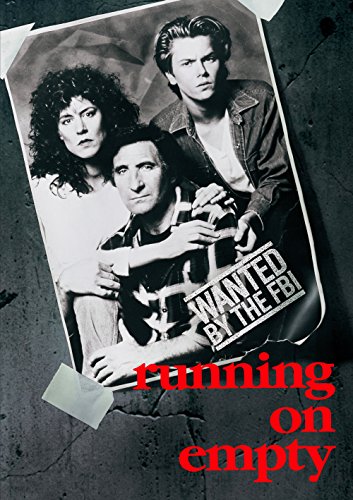