I am Legend | Teen Ink

I walked through the door into the dimly lit theater, chose an aisle, and picked out a chair close to the middle. Looking down at the grimy floor, I apprehensively put down my purse, and opened my Reeses Pieces box and my bottled water. As the lights went out, and the previews started playing, I couldn’t help but wonder how many strangers had sat in my seat before me, and how hygienically acceptable they were. The movie started rolling, and soon I was absorbed into the film, and forgot all about the mysterious stain by my right foot.

A few months before I am Legend came out; I had the opportunity to read the book that started the film was based on. Written by Richard Matheson, I am Legend was about a man named Robert Neville who, due to a deadly virus, remained the last living man on earth, though he wasn’t alone.

Each morning, Robert would adorn his house in wooden stakes, garlic, and mirrors. Each afternoon, he would go hunting for the diseased. And each night, Robert would bolt up his house, and anxiously await the daybreak, listening to the screams of those outside his home.

Robert was the only survivor of a fatal plague that turned whoever caught it into vampires. The odds are more than four billion to one. Robert has the advantage of daylight, when he can get supplies, kill the sleeping, and run tests on them in hopes to find a cure. But soon the vampires develop their own medicine that enables them to walk around in broad daylight, and it seems that all hope is lost for Robert.

I am not normally into books of this genre (or anything that involves vampires, for that matter), but this book was written in such a way that it was impossible to put down. Its captivating passages left me full of fear and sympathy for the protagonist. Matheson did a remarkable job of vividly portraying mankind’s greatest fear: being entirely alone.

Most films based on movies, twist the plot so significantly that it is impossibly for anyone to like them. But that was not the case with I am Legend. They took the story line in an entirely different direction from the original tale, but easily got away with it, by making the movie so high-quality that I hardly even noticed how different the movie and the book were.

In the movie, Robert is surrounded not by vampires, but zombie like creatures. He seemed to be immune to the epidemic that was started when a scientist believed they had found a cure for cancer. Soon the entire world was vaccinated with the “cure”, but Robert seemed to be the only one to survive, except for his faithful dog, who remains his only company until a mysterious woman saves his life.

The casting for this movie was excellent, and the choice of Will Smith playing Robert was perfect. Smith was able to illustrate the level of heartrending feelings that Robert experienced, and the near insanity that he suffered, so that by the end of the movie, I liked Will Smith’s interpretation of Robert as much as Matheson’s.

As I was heading back home after the movie, it occurred to me that now I could safely say that I wasn’t disappointed in a film that was based on a book. 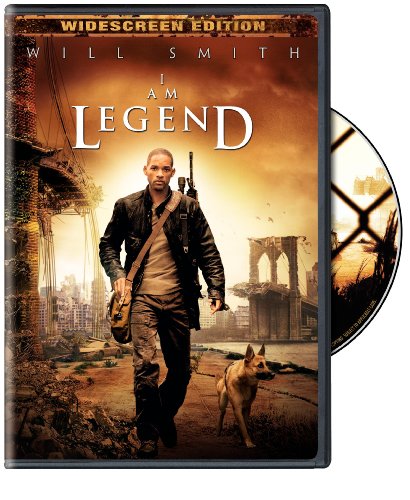