"Twilight" is a stirring, best selling book series and is now a mega-hit, blockbuster movie starring Rob Pattinson, Taylor Lautner, Kristen Stewart, and many other amazing actors. The first movie in this amazing saga has Bella Swan moving from Phoenix, Arizona to Forks, Washington. As you can imagine, Bella isn't thrilled with moving to a small little town, starting in a new school, and having no friends except for her childhood friend Jacob Black. Everything seems pretty normal until she meets Edward Cullen, a loner who's devilishly handsome. He seems pretty normal, but when he stops a car with a single hand, Bella knows that something's up. After a little research, she finds out that Edward's a vampire; also is his whole family. They end up falling head-over-heals for each other until a band of evil vampires threaten to attack Bella which also threatens Edward and Bella's relationship.

This is a fantastic movie that's one of a kind with it's action/adventure/chick flick persona. Stephanie Meyer and the filmmakers did a wonderful job of making vampires that didn't fit the regular vampire stereotype of coffins and fangs. Instead, they made these vampires kind of normal as they try to live kind of normal lives. This movie is a great recommendation for anybody who enjoys the "Harry Potter" series, the "Twilight" series, or has a HUGE crush on Rob Pattinson. Don't forget to check out the Bella and Edward "Twilight" dolls, and "New Moon," the second movie in the saga. Both the dolls and the movie come out in November of 2009. Enjoy! 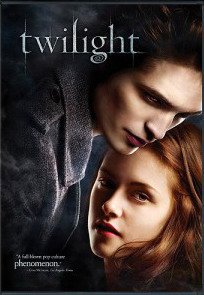 "Give peace a chance." --John Lennon

View profile
love the books, but the movie could have been so much better...bad acting, left alot out, actors/actresses did not fit their parts...i was disappointed...u are an amazing writer tho
Mystery_Girl SILVER said...
on Oct. 27 2009 at 2:35 pm
Mystery_Girl SILVER, Lake, Michigan
8 articles 6 photos 86 comments

View profile
Well...I am sorry. I HATE the books! But that is SO cool!!! LUCKY YOU!!!
Twilight Lover 101 said...
on Oct. 22 2009 at 9:25 pm
I disagree about it being a TERRIBLE movie but I think Kristen Stewart is one of the worst actors. But I think she totally looks the part. I LOVE the book and guess what....Stephanie Meyers son goes to my school and I saw her in her car picking up her son.
thomasb said...
on Oct. 14 2009 at 6:29 pm
The review was well written I could tell you are a good writer. I have to disagree I believe the movie was nowhere near as good as the books because it misses a lot of good scenes. You did a good job. I like how you incorporated Bella’s feelings about moving to forks when you said, “Bella isn't thrilled with moving to a small little town, starting in a new school, and having no friends except for her childhood friend Jacob Black” because most people focus on Edward and total forget about Bella. You could have said about how Bella and Edward’s relationship grew through out the movie because to start Edward hated Bella because he wanted to kill her causing his inner monster to come out, but as the movie progressed they fell in love. I like when you said, “Stephanie Meyer and the filmmakers did a wonderful job of making vampires that didn't fit the regular vampire stereotype of coffins and fangs. Instead, they made these vampires kind of normal as they try to live kind of normal lives” because I know before I read the books or saw the movie I thought I was a typical vampire movie when vampires burn in the sun, sleep in coffins, and what not so that made me not want to see the movie or read the books. Until one of my friends told me it was not like that at all and was a really good book I did not read or watch the movie. Now I have read all the books and seen the movie numerous times
Mystery_Girl SILVER said...
on Oct. 14 2009 at 7:13 am
Mystery_Girl SILVER, Lake, Michigan
8 articles 6 photos 86 comments

View profile
That was a very good reveiw! Good job. I personally disagree. I think the movie is TERRIBLE acting, and filming. It was a disgrace to the books if you ask me....just my opinion. I have read all four books and watched the movie several times! The books are no where near like the movie...very good reveiw though.
ubercool12 said...
on Oct. 8 2009 at 9:18 pm
I can not stand TWILIGHT! Good review though! Twilight is annoying, and so are the people who are like obsessed with! You seem like a good writer!
Kennedy M. said...
on Sep. 30 2009 at 9:38 pm
You did a good job on this article, but I would have to disagree. In my opinion, Twilight was not a good movie. I have read Twilight and I am a fan. It was a really cheesy movie. The filmmakers could have done a much better job. The actors and actresses did not match their characters. There were a few characters that matched their descriptions, like Alice. Otherwise, there was really bad acting. They also left a lot of good parts out which made me not like the movie more.
jacobk said...
on Sep. 30 2009 at 4:11 pm
I disagree with your review because this movie lost all some of the detail in the book. Also the action is good, but the actors that play Bella, Edward,Jacob etc do notfit the book. The movie could have been better. Love the books and you did a good job writing this.

Favorite Quote:
"To the well organized man, death is but the next great adventure."
-Dumbledore, Harry Potter and the Sorcerer's Stone

"There's nothing wrong with you. There's just a lot wrong with the world you live in."
-Chris Colfer

View profile
Love the books, hate the movie. Your a great writer, though.