Hamilton the Movie: A modern take on an influential historic figure | Teen Ink

Hamilton the Movie: A modern take on an influential historic figure

Have you wanted to see Hamilton, but not willing to sell your house to get tickets? Me too. But know you can. Open Disney+ and in seconds there it is. The yellow lit stage filled with people of all shapes, colors, and sizes singing through the powerful story of Alexander Hamilton.

I know three hours of sitting in front of a screen is not as intriguing as the feeling of stepping into a Broadway theater, but if you take the time to watch it, I’m confident that your point of view on the movie may change. As the stage lights, and the first notes ring through the auditorium, you quickly forget you are sitting on your couch, but instead are feeling the rough fabric of the theater seats as the anticipation of Aaron Burr entering the stage hits.

This musical, starring Lin-Manuel Miranda, Leslie Odom jr., Philippa Soo and many more talented actors, is still showing on Broadway today as well as on Disney+, with no end in sight. Hamilton the musical, holds the record for being nominated for the most Tonys, having 16 nominations and winning 11. After possibly watching this movie too many times, I believe that as a film, it lives up to and deserves every positive review and award the show has received.

This movie not only puts you into a Broadway theater, but the camera angles and shots make you feel like your right there next to the characters and what they are singing is almost a performance created just for you. As someone who has tickets to the Broadway production of Hamilton, I can’t imagine any seats in the theater that could portray as much detail and expression that is shown in each scene of the movie. The emotion the actors depict, make it harder to believe they were simply given lines to memorize and act out, but instead it’s as if they were taken straight out of the 1700’s. Every individual actor and actress bring this musical together in such a magical way where you might even catch yourself wanting to learn more about the history of America.

Hamilton is described as “America then, told by America today” which is the perfect way to express how powerful the show truly is. More than half of the original cast are people of color, telling a story of white slave owners and revolutionaries. This puts into perspective how much America has changed, grown, and continues to grow since then. The writing of this musical started in 2009 and finally made its debut in January of 2015. Since the musical was first performed, and even more recently, it is so interesting how much attention the community has brought to the amount of inequalities still present relating to people of color. What Lin-Manuel has shown is a rewritten version of our history, where past historic leaders are re-envisioned as people of color.

The movie starts with the voice of King George III telling the audience to silence all cell phones and devices, putting you right into the theater. Forty-six mesmerizing songs follow, all with different and unique styles, yet somehow each song leads perfectly into the next. Some of my favorites are “One last time”, "Yorktown,” and “Dear Theodosia”. This list could go on with all the spectacular lyrics, instrumentals, and harmonies the cast a crew have beautifully performed in this musical.

So, Next time you find yourself wondering what to watch, whether you’re a musical fan or not, I would highly recommend choosing Hamilton. Let yourself watch the exciting, surprising, and tragic events of America’s history play out in front of your eyes. 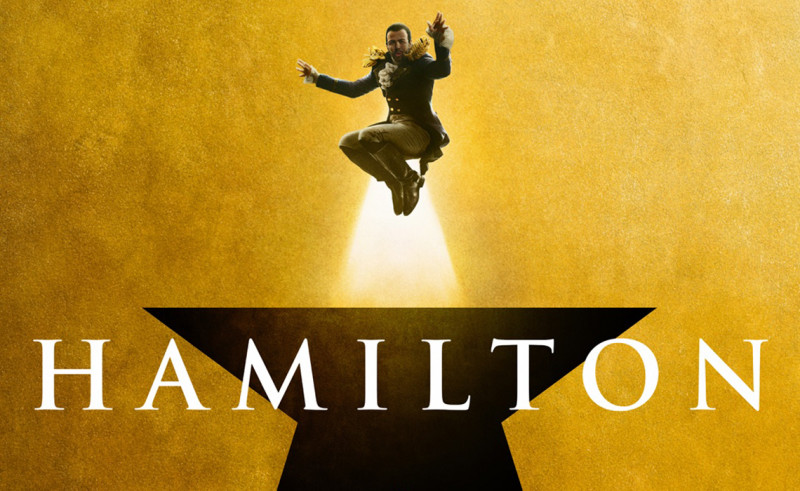