Life of Pi by Yann Martel

This book’s protagonist is like no other. Bright, inquisitive, and named after a French swimming pool, Piscine Molitor Patel is a young teen living in Pondicherry, India, and wants nothing more than to be close to God. Life of Pi by Yann Martel is a curious little novel of epic proportions. Is it a story of adventure? Of self-discovery? Of survival? Or something else entirely? These are questions the book poses, self-demonstrating in its handling of truth.

After an overview of Pi’s unique childhood becoming Christian and Muslim along with Hindu, the story catches up to Pi’s teen years. His family moves their family zoo and them from India and Canada on the cargo ship the Tsimtsum. However, after a tragic accident, Pi becomes the sole human survivor, along with a zebra, an orangutan, and an adult tiger. This is the setup for one of the most intellectual, adventurous, and strangest novels in modern literature.

However, this is not a simple book of religion. The novel bursts with puzzling enigmas scattered amid the wild blue Pacific. It brilliantly captures the isolation of being stranded at sea with the terror of a tiger as the only companion. Pi’s disintegration from an optimistic teen to a cunning tiger tamer to a survivor is both harrowing and fascinating. All throughout, Pi’s narration never fails to lose its authenticity and charm. The book is rife with vivid imagery and descriptions that leave the reader hungering for more, just as much as Pi is desperate for food and water.

The novel is equal parts realistic and magical. Martel’s precise syntax and format is written for the reader to think and be spellbound by Pi’s fantastical tale of survival. That is, until the end: perhaps Pi’s tale was only a tale after all.

But the real beauty of Life of Pi is its ambiguity. What is fact or fiction? Who knows? Does it matter? The novel poses literal and metaphorical questions, ones that neither cease nor are ever fully answered. But in the end, it is not a matter of which story was true, but as Pi asks, which one is preferred.

Life of Pi may not make everyone believe in God, but it is certain to reawaken the faith in the power of fiction. 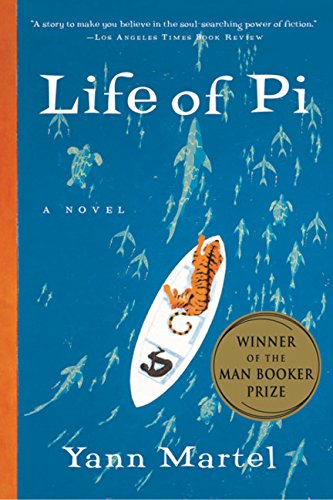 This is one of my favorite books that I always reread, I recommend it highly.