Balzac and the Little Chinese Seamstress by Dai Sijie

Balzac and the Little Chinese Seamstress by Dai Sijie

I discovered this tiny book buried under others on the shelf. The strange title piqued my curiosity, and my intuition told me that this book was worth reading. If you enjoy works of literature that take you to another place and time, then this is the one for you.


The author, Dai Sijie, was “reeducated” during the Chinese Cultural Revolution in the 1970s. This semi-autobiography tells a story of two teenage boys finding hardship, forbidden western literature, and love in an isolated countryside. The main character, Ma, and his friend Luo are forced to labor in fields and mines, working for the proletariat in order to be released from their reeducation. However, the boys never give up their exuberant, rebellious spirits. When they discover that an acquaintance named Four-Eyes has a hidden suitcase full of forbidden books, they try to wheedle and coerce him to lend them Western novels to no avail. Finally, Ma and Luo steal the books on the night Four-Eyes leaves the countryside.


The novels reveal a magical world to them—a place where they retreat inside their minds to find love, freedom, and everything else that has been banned from them in the Cultural Revolution. In their romantic awakening, both boys fall in love with the daughter of the village tailor, the Little Seamstress. She and Luo become a couple, and this uneducated mountain girl grows more sophisticated as Ma and Luo enlighten her with tales of desire, beauty, and other romantic ideas. The boys also lose their innocence in this period. Ma experiences, for the first time, jealousy and vindictiveness. He envies Luo for being the Little Seamstress' boyfriend, and he revenges himself against the village headman by making him suffer more pain than necessary during his tooth operation. Meanwhile, Luo finds love and the courage that comes along with it. He is terribly afraid of heights, but he crawls over a ridge between cliffs everyday to visit his girlfriend.


However, their secret lives have severe consequences that make the reader wonder whether the characters' lives have changed for the better or worse after gaining the knowledge. The Little Seamstress gets pregnant and aborts the child. Later, she becomes preoccupied with beautiful clothes and modern fashions. At last, she is dissatisfied with her solitary life in the poor countryside and leaves for the city. I could not help thinking that even though she gains a fuller understanding of life through reading the novels, would it have been better if she as remained innocent and content in the mountains? Even though Ma and Luo hate the Cultural Revolution and the government restrictions, the ending of Balzac and the Little Chinese Seasmtress seems to ask, is knowledge a curse or bliss? 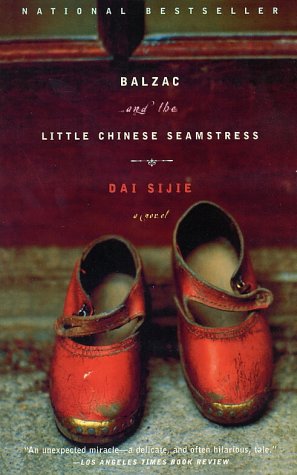