Another memoir following the harrowing path of a young woman recovering from anorexia nervosa hits the stands – one that documents not only the brutally truthful telling of sickness but of a decision to reach health as well. Elena Vanishing, ghost-written by the titled Elena’s mother and young adult fantasy writer, Clare B. Dunkle, follows Elena through hospital stays, her college experience featuring anorexia in a starring role, and the moments in which she in earnest decided to truly fight for recovery.

The book begins with seventeen-year old Elena at a hospital in Germany, where she and her family were living at the time. As the book progresses, readers are provided with a look inside both hospital and residential treatment settings, as well as a shocking insight into doctor and patient relationships; a revelation that not every doctor is competent in ethics related to responsible treatment of a patient.  Throughout the book there are flashbacks to years before Elena’s seventeenth in order to explain events which triggered the onset of her eating disorder, as well as to provide insight in general into the kind of person Elena is. As a child of a parent in the military, Elena’s early life was a touch outside of the ordinary as the family was stationed in Germany, which – though in some ways positively shaped Elena’s personal growth – brought difficulties in finding adequate treatment for her anorexia. Elena and her sister also attended a German boarding school during their adolescent years – a setting in which Elena’s disordered behaviors developed.

However, though the book can be found in the Young Adult section of Barnes & Noble, Elena Vanishing can reach more than readers of the adolescent age group. Elena’s story is told beyond her adolescent years into her early twenties as well, perfect for college-age readers. As a collegiate myself, the ways in which I related to Elena and her eating disorder throughout her college years was startling. However, the ways in which a person can relate to struggles of mental illness extend beyond the confines of age and can therefore be insightful for readers of any age.

In praise of this memoir, I appreciated the articulate and poetic prose in which the story is related.  Even if the message itself was at times depressing, certain lines I came across in the book were nothing less than beautiful. The book also emphasized something I think is important, especially in memoirs recounting mental illness: the impact of words and just how long they can stick with you; words that may or may not have been thought harmless by the person who spoke them, but words that reappear in one’s mind time and time again nonetheless – usually ones that hurt. It often tends to be the negative that cements itself more than the positive, right? At times it may seem so. In Elena’s case, malicious words spoken to her by a doctor haunt her for years. Their reappearance throughout the book portrays just how impactful they were to Elena’s sickness and her self-perception.

Additionally, as detailed as Elena’s disordered behaviors are in the book, the author also provides detailed explanations of positive coping skills and recovery-minded breakthroughs of hers. This involves healthy developments in both therapy and situations involving family dynamics.  There can often be an imbalance in memoirs of details of sickness and recovery, and the endeavor to include productive moments in Elena’s recovery process alongside the distressful periods is evident.

However, I have a few criticisms as well. First, especially in the beginning I sensed what I guess to be an unintentional romanticization of Elena’s eating disorder; this tone didn’t necessarily persist to the end, but it still disturbed me. Details that may be triggering to a reader suffering from the same illness are included, such as Elena’s weight gain and loss, caloric intakes, etc. The inclusion of such details and their necessity in a truthful account of one’s story is controversial, but I believe that the same impact can be grounded without the mention of such numbers. However, some argue that this sort of walking-on-egg-shells approach is a form of censorship; I view it more as writing responsibly for expected audiences. Certain details therefore could have, and should have, been discarded as they may be dangerous to more impressionable minds.

Finally, my one technical criticism of the book is the occasional messiness in transitions between scenes. A few times I had to go back and reread paragraphs only to realize that the setting had changed without me realizing. Though not a huge turn-off, the reoccurrence of it becomes bothersome.

All in all, the articulateness of the book makes the story a worthwhile read, as well as – of course – the actual story. The honesty of Elena’s voice in recounting both her positive and negative experiences is refreshing and offers an understanding to both readers suffering from an eating disorder and any loved ones. Emotionally impactful and inspiring, this memoir may be perfect for any readers who have taken longer than those around them have expected to want recovery, and who may need a little hope.

**Also worth mentioning is that Elena’s mother, Clare B. Dunkle, also has published her own memoir, Hope and Other Luxuries: A Mother’s Life with a Daughter’s Anorexia, which tells the story from her perspective. Notably, included in Hope are the steps Clare Dunkle took to aid her daughter in writing Elena Vanishing, from reading her daughter’s journal entries to talking to Elena directly about her experience with anorexia. 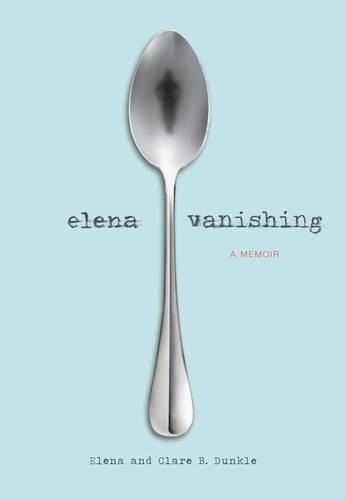