The companion novel to Tricks, another novel by Hopkins, Traffick continues the stories of teenagers Whitney, Seth, Eden, Cody, and Ginger. While Tricks shared the beginnings of how these teenagers became ensnared by the world of trafficking and addiction, Traffick follows them through their recoveries and relapses. The overall tone of the novel is scared and tentative, but hopeful.

Typical of Hopkins’ distinctive verse novel format, the book is divided into the five different perspectives, allowing us to see into the minds of each character. The voices, personalities, and stories of each perspective are unique, rendering it unlikely for the reader to confuse characters as the perspectives switch.

Whitney is the girl who was led into child trafficking by a seductive photographer, and through him became addicted to drugs. Now headed in the direction of recovery, Whitney faces the strain her struggles have put on her relationship with her family, as well as the PTSD addiction and trafficking has left her with.

Seth, the farm boy kicked out by his father once he revealed he was gay sold his body and love to survive in a world more complicated and unforgiving than he could have imagined. Escaping the disappointment and ostracization of his father was one thing, but will he be able to leave the ugly world he’s entered and find a better life?

Eden is the preacher’s daughter who turned tricks to survive in Vegas after escaping an abusive religious facility. Now part of a prostitute rescue program, she faces the daunting choice of reaching out to her boyfriend, Andrew, who she’s afraid won’t be able to forgive her for her sins, as well as her religious extremist parents whom she’s dependent on as a minor.

Cody is the boy who became addicted to gambling and began selling his body to make ends meet with financial demands. After a nasty run-in that has left him crippled from the waist down, he depends on his loving girlfriend and family to support him through a life of disability that he’s not sure he wants to live.

And Ginger, who escaped an abusive mother, leaving her younger brothers and sisters behind, as she left for Vegas with her girlfriend, Alex. Together they turned tricks in exchange for a place to stay, but as situations grew direr, Ginger found a way back home to her siblings with a grandmother willing to care for her, while Alex has accepted the outcome of living the rest of her life as a prostitute.

Hopkins credits her ability to write realistic accounts of these struggles to anonymous correspondents willing to talk to her about their own real-life experiences in trafficking and addiction.  There aren’t always Hollywood happy endings in these circumstances, and while Hopkins’ novel ends on a hopeful tone, she manages still to relay the heartbreak and cruelty present in these types of situations.

Speaking as a fan of Hopkins’ young adult novels, Traffick did not disappoint. Her portrayal of the recovery process is refreshing and painfully faithful to the real experience, including the sometimes inevitable relapses. The book is emotionally impactful, and is a recommended read for anyone who needs reassurance that things can get better, and that no matter your situation or the things you’ve done, you’re worthy of a better life – a good life. 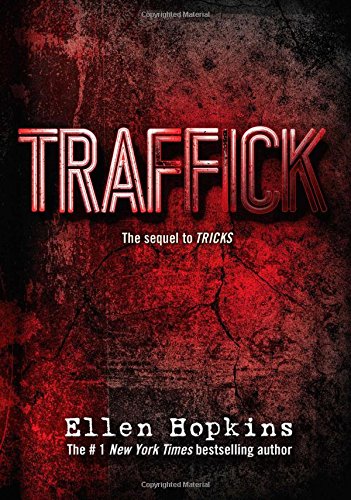