What drives one boy to leave the only bed he has ever slept in and delve into the jungle with a total stranger? “Threatened” by Eliot Schrefer embodies a young boy named Luc who moves from the crowded, smelly, streets of Franceville to the deep jungles following the bold yet elusive “mock men” in this thrilling and adventurous novel, not for the faint of heart.
Schrefer begins with the perspective of the weak, dirty, and malnourished young boy, Luc. Luc must give up the little money that he earns from working at a restaurant to the drunken and coldhearted Tatagani. This money goes to pay off his mother’s hospital bills when she died from “the worm” which is a deadly disease that kills anyone slowly, and painfully. After years of working continuously for years on end, Luc has given up all hope of ever paying off the thousands of dollars that he still owes, when a refined professor from the “National Geographic” comes to his city, Franceville. All of a sudden his life is altered from being a dirty street urchin, to being a knowledgeable and strong part of the jungle itself. In the jungle he meets all manner of animals that he once feared, but when hunters from the town come into the jungle, they mean business. Faced with impossible choices between his own species, and the animals that took him in as family, Luc must choose a side … and fight.
This novel is intricately woven with enough realistic thrills to last a lifetime. However, the prime location that the thrill occurs is in the mysterious and haunting jungle. At every twist in the road Luc encounters either a new threat, or one that he has dealt with before. The inhabitants of the jungle were definitely the heart of the thrills. Luc deals with many different threats, but a continuous one is the chimpanzees that he works so hard to get along with. The dominant males are by far the most dangerous. The fight scenes that include the dominant male chimpanzees will make your blood turn to ice, and stop your heart mid-beat. Another continuous threat is the jaguar. A skilled predator and frightening opponent makes the jaguar one of the most threatening dangers in the animal kingdom. One swipe of this formidable predator’s paw could kill a full sized adult human. When it comes time for Luc and the chimps to encounter the jaguar, you will be sitting on the edge of your seat. As you can see, Schrefer’s novel is filled to the brim with thrilling encounters that will be leaving you with your mouth hanging open.
Adventurous as ever, “Threatened” will continue to amaze you every time the page turns. Once again the jungle is where all of the adventure takes place. Venturing into the jungle with a companion might be just slightly stressful, but when Luc’s only human friend vanishes one day into the night, it goes from mildly stressful to extremely stressful and frightening. Daily, he must venture into the depths of the jungle in order to wash his few clothes. Luc’s path goes over venomous insects, and stinging plants. In addition to those dangers, there is the ever present presence of the “mock men”.  Unpredictable, and increasingly dangerous, they might attack at any given moment. A further duty that Luc must fulfill is the search for food. When he had the professor to help him, Luc had been totally fine, but now he must scavenge on his own, fighting against the forces of Mother Nature herself in this intriguing novel. The adventure in “Threatened” is so intense, and detailed that anyone could find themselves holding this novel with an iron strong grip.
This novel by Eliot Schrefer is cleverly enter twined with thrilling moments and adventurous actions that tell the story of how one professor, two chimpanzees, and the mysterious jungle changed one boy forever. You will be sucked into “Threatened” head first, and into the unknown. 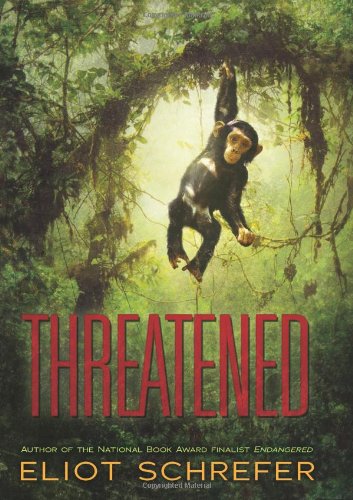