How to Save a Life by Sara Zarr | Teen Ink

How to Save a Life by Sara Zarr

Sara Zarr’s “How to Save a Life” follows the intertwining of two girls’, Amanda and Jill’s, lives. Jill, dark and cynical, is – after a year – still heavily mourning the death of her beloved father. Others tell Jill she’s like a whole different person than she was before – and not for the better. Jill is skeptical and believes her mother, Robin, is naïve when Jill is told her they will both soon be housing a young, pregnant girl who has agreed over the internet to give them her baby after it is born. Jill is sure that her mother is being too trusting by not getting a lawyer to sign off on the deal, but their soon-to-be ward demanded there be no inclusion of lawyers or contracts. Mandy, large with a baby and beautiful, escapes from her step-father and mother to start a new life; a life that begins with the agreement to let another woman adopt the baby still in her stomach. Things become complicated when Jill and Robin learn Mandy has lied about a few important details, especially when Robin and Mandy have become so close. Jill internally berates herself for the unkind person she has become following her father’s death, and works to properly grieve and accept the passing of her father. With her friends no longer talking to her, after Jill had pushed them away with the utterance of “Leave me the hell alone!” Jill finds herself increasingly lonely. In comes Ravi, a blast from the past, and suddenly Jill begins to feel excited about the future – a.k.a. seeing him again, even though she has a boyfriend. Will Jill and her boyfriend be able to accept that their relationship does not hold the same kind of love it used to? And will Mandy learn to trust Robin and Jill enough to be honest with them and tell her about her tragic past?

The chapters of this book are split between the two female protagonists, Jill and Mandy. Told in first person from each girl, both have a story to tell with distinct voices and feelings about what their futures hold in store for them. One large criticism of the book is that, for most it, the story is slow and hard to get into; far from the addicting quality that I look for in a book. Only three-quarters of the way through did I finally find the book to be a bit harder to set down. There were times when both characters frustrated or compelled me to read more, but it was really the unlikely friendship that forms between the two immensely different girls that warmed my heart.

Though I can assume the life saved in this book is supposed to be Mandy, I feel like I can conclude that, by the end of the book – without giving spoilers - it is really Mandy who saves herself. And though Jill is a difficult character, sometimes hard to relate to despite her grieving state, I found myself sympathizing with her more as the story went on.

Overall, the story is heart-warming – though might be a tear-jerker depending on how susceptible you are to crying while reading. If you are looking for an addicting book with a fast-paced story and tons of action, this book may not be for you; however, if you want to read the story of three women who each learn again to love both themselves and others, you’ll probably really enjoy this could-be gem. 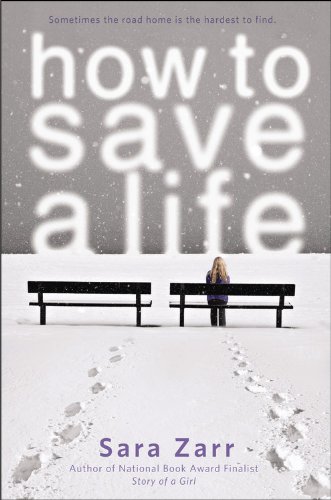