In a world dominated by people who have the audacity to “be gay, light, shining,” one often finds people who are tagged “shy, diffident, timid” simply because they just don't mix with the crowd. They don't enjoy parties, they don't perform well in group meetings, and they flunk when asked to do something daring and chivalrous. They are bullied the most, not only by their peers, but also by teachers, who think they are not smart enough, and their parents, who think they ought to be more outspoken. Such people are stigmatized and labeled, in no friendly terms, as “introverts.”

In her book Quiet: The Power of Introverts in a World that Can't Stop Talking, Susan Cain explores the factors that, in the last few centuries, have led to the development of extroversion as the cultural ideal and introversion as a socially stigmatized state.

Cain claims that being extroverted became the ideal once we shifted from a culture of character to a culture of personality. With the rise of the notion of an industrial state, people made their approach salesman-like. Soon it was no longer a question of what you thought or what you did; people started judging you based on how you looked and how you presented.

But is this the main reason behind the downfall of character? Cain assumes that it was not as much the rise of industrialism that led to introversion becoming stigmatized; rather, it was changing perceptions of success, fame, and honor, limiting them to a dashing personality, possession of wealth, and a certain proud narcissism.

Cain lists many other factors as well, trying, at first, to recognize a boundary line between introversion and extroversion, and then to resolve the differences.

She ends on a very positive note: Whether you are an introvert or an extrovert, “love is essential, gregariousness is optional.” People need to realize that we are different. We must accept others as they are, while trying to create our own niche within the confines of our interests.

This book is a must-read for all introverts, and even more importantly, for extroverts. We need to give each other space – space to work, to think, to imagine. That way, we can build a world that's more peaceful and quiet. 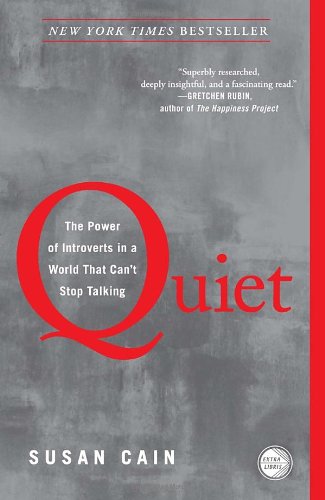