Brain on Fire: My Month of Madness by Susannah Cahalan | Teen Ink

Brain on Fire: My Month of Madness by Susannah Cahalan

“Brain on Fire” is a brilliantly articulated personal account of a young woman’s unforeseeable descent into madness – though Cahalan’s comes in the form of a suspenseful tale as well as a memoir. Diving headfirst into the book, you will initially come across familiar waters as Cahalan describes her life previous to the onset of her illness – which you only learn the name of later on. At twenty-four years old, Susannah had a stable boyfriend and an exciting job as a journalist for the New York Post. But then she began experiencing startling symptoms such as extreme paranoia, hallucinations, and even seizures – all completely new to her.

The undeniably altered young woman spent a month in an NYU hospital being treated by top-notch doctors not only to find a cure for whatever was ailing her but to find the diagnosis they needed in order to have any chance at saving the outgoing and witty Susannah her family and friends knew her to be.

Cahalan still has no memory of much of what happened during that month in the depths of her illness but pieces together the story through security camera clips from the hospital, journals from her father, and memories recounted by her loved ones who stuck by her side even as she became a monster utterly unlike her previous self.

There is a possibility that these pages may jerk tears out of you – following the emotional roller-coaster of not only Susannah but of those around her; however, it is undoubtedly a worthy read. I especially recommend it to those who are interested in mental illness, psychiatry, and neurology. I’ll give you this warning though: there is a plethora of medical jargon which can be somewhat of a turn-off at first, but as you read on, you will get used to the big and unfamiliar words and realize that they are inserted into the story for good reason – to help readers understand.

“Brain on Fire” is enlightening, not only serving as inspiration in personal circumstance but extremely important regarding information on an illness that has not received the mainstream exposure it deserves as one that is in fact treatable - yet goes highly undiagnosed - among individuals often labeled as “psychosis, not otherwise specified” - translated by Cahalan as “medical jargon for ‘we have no clue’” (Cahalan 233, 2012). The author herself dedicates the bestselling book to those like her who desperately need a diagnosis, endeavoring to reassure others out there that they are not alone in their struggles.

It is a story of hope, of perseverance, of love, and it is a slap-in-the-face reminder that no one has any right to judge so-called “crazies” when you have no idea of the journey they have ahead, how far they have come, and all the effort they put into putting on a good face. 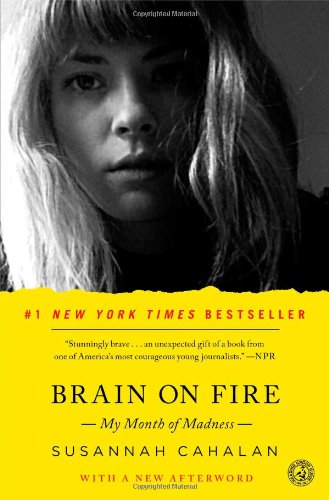