Children of the Sea by Daisuke Igarashi | Teen Ink

Children of the Sea by Daisuke Igarashi

Children of the Sea
Written & Illustrated by: Daisuke Igarashi
Recommended for fans of the themes: Biology, Mythology, Adventure, Mystery

What would a twelve-year old girl and two boys raised by dugongs (large marine mammals) have in common with one another? They all share a similar viewpoint on the world, and more specifically, the sea.


Ruka is an average Japanese school-girl (at least in appearance); however, jaded by her parents’ divorce and her incapability to interact with those around her, she often appears temperamental and isolated to others. After getting barred from her school’s hand-ball team for roughing up a classmate, Ruka has no high expectations for her summer vacation, that is, until she meets a mysterious boy named Umi, an unfathomable and exceptional boy who can’t withstand dry air on his skin for long periods of time and incredible swimming abilities. Sora, Umi’s brother, also shares these peculiar characteristics, although to a more extreme degree and acts more hostile towards Ruka. Although Umi and Sora hardly interact with anybody other than their guardian Jim (a man whose body is covered in tattoos and also has a perplexing background), they also find that they share common points with Ruka; they all share a common mindset about the world and they’ve all witnessed a phenomenon they refer to as “The Ghost of the Sea”. While all this is going on with these enigmatic children, there is a mysterious disappearance of fish around the world, with the only similarities between the fish being that they are all spotted and they all disappear in a flash of light.
Children of the Sea is undoubtedly an exceptional graphic novel series in the world of literature. The characters, the drawing style, and the information and mythology presented in the story are sure to draw in almost every audience member. The characters are remarkably unique and diverse from one another, each person containing personality aspects and backgrounds that will capture the readers’ attention. I hold a particular fondness and respect for Ruka, a seemingly ordinary girl with a very mature perspective on the world around her and interactions within a universe that most people only dream of connecting with (viewing). The art style is relatively simple, considering the diverse range of topics Igarashi approaches
List of Characters:
Ruka: Protagonist of the story, middle-school student, tomboy, loner
Azuma: Ruka's dad and an oceanographer
Umi: A boy raised by dugongs, the younger brother to Sora, more gregarious than his brother
Sora: Umi's older brother
Jim: Guardian to Umi & Sora 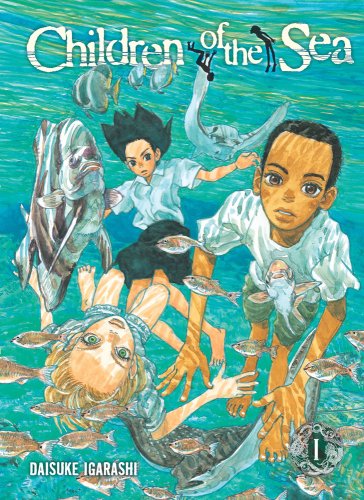