After Teru Kurebayashi loses her beloved older brother, she finds herself in contact with a mysterious yet kind man nicknamed Daisy, whom she’s able to reach at any time through text-messages. About a year after Teru’s brother’s death, Teru finds herself in debt to the seemingly arrogant and lazy Tasaku Kurosaki, a blond, handsome school custodian. As Teru’s slowly working off her debt to Kurosaki, she finds herself involved a dangerous computer hacker. As Daisy comes to Teru’s rescue once again, Teru begins to wonder if her mystery man is closer than he appears to be and if Kurosaki is actually the callous brute he seemed to be?

Dengeki Daisy is the perfect shojo (romance) manga series for any novice to graphic novels or a lover of an interesting plotline. The series has an exceedingly interesting yet gripping plotline, full of comedic scenes with heart-breaking amounts of drama and romance. While the plotline might initially seem like a regular school drama, there are heightened moments of suspense and intrigue that’ll have any action lover intrigued. The artwork is extremely appealing (particularly to those who appreciate a immense amount of shading in the scenes), and the characters are interesting. The characters (like Teru), unlike multiple other graphic novel series, aren’t particularly scrawny or over-endowed, yet are visually attractive. The main character, Teru Kurebayashi is, like most shojo (young girl) characters, extremely cute, endearing, but slightly ditzy, an orphaned, straight-A student who somehow manages to maintain a positive attitude and show affection and care toward others. However, the persona that I’m personally most interested in reading was Kurosaki. His devilish attitude and good-looks conceal the emotional conflicts he’s going through in his care and relationship with Teru. Watching the characters develop emotionally and psychologically will definitely interest most fiction readers as the plotline continues to progress and the action heightens.

I would recommend Dengeki Daisy for any reader looking for an original plotline and a nice cute escape from reality. 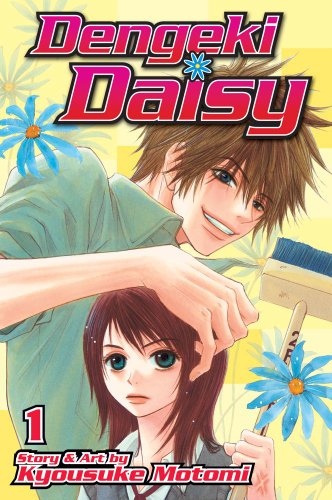