Under the Dome by Stephen King | Teen Ink

Under the Dome by Stephen King

Snow globes are magnificent little adornments. The inside contents are simply cute. However, how cute would it be to be the contents inside the snow globe? To be trapped for what possibly can be forever? And to make matters worse, to be manipulated by a power-thirsting and most despicably sanguinary selectman; furthermore, the dome brimming with pollution and stripping away all the fresh oxygen needed to breathe? The people of Chester’s Mill, Maine must face these life-or-death dilemmas in Stephen King’s monstrous nonetheless worth reading novel Under the Dome. As unfathomable as this scenario seems, Stephen King makes it seemingly plausible in Under the Dome.

The novel follows a plethora characters after what becomes known as in Chester’s Mill as Dome’s Day. Chaos erupts in all sorts of forms after Dome’s Day. Death roams freely, capriciously murdering anyone in the way. What is causing all that chaos in a seemingly perfect and quiet little town? An invisible dome that appears out of literally ex nihilo. Seems impossible yet the denizens of Chester Mill must accept it as harsh reality. The President chooses Barbie, a war veteran, as the town’s leader. However, James “Big Jim” Rennie, the town second selectman, is anything but willing to allow anyone else but himself take charge to the town. With the help of some cooperating people, Barbie must fight to save his town not only form the dome but also from a manipulative selectman that will do anything to gain complete power.

Under the Dome is a behemoth of a novel. I find it to be clever and original. It is entertaining from the first page until the last page of the novel. Additionally, I admire Stephen King’s valor for using many characters in his book as well as using the perspective of plenty of the character. Only a veteran and elite novelist could do such a thing. Moreover, his use of Biblical allusions demonstrates his knowledge of the Bible.

The novel has deep themes of political as well as environmental issues, which are thought provoking.
However, I did feel the ending lacked King’s usual creativity. I felt as though he builds up much momentum with this massive novel—almost as thick as the Bible—only to end somewhat flat. I am not saying that it is not engrossing but that it lacks the ending the novel builds up.

Another thing that I did not appreciate much was King’s somewhat subtle mode of making Christians look dangerous and radical. The antagonist Big Jim is a supposed Christian yet acts otherwise. I do not know exactly if King intended to make Christians seem like the antagonist or not; but it did trouble me. I know that King wanted to portray Big Jim as a Christian to make him seems more diabolical, and I am perfect with that. Nonetheless, if Mr. King’s purpose was to make Christians seem diabolical, I am terribly offended, as a Christian, although I know all supposed Christians are not saints and some are perhaps worse than non-Christians—but those “Christians” are not true Christians. (I hope I am not reading too much between the lines or that I am the only one who feels this way after reading Under the Dome.)

This novel will be a favorite of Stephen King fans. It is good novel to start with for those who have never read a Stephen King novel. I enjoyed it and I am sure anyone who reads will too. Novelist Lee Child called it “The best yet form the best ever”. I rate it a 3 ½.out of a 5.

Furthermore, a television series adapted from the novel is set to premiere on Monday, June 24, 2013 at 10PM on CBS, starring Mike Vogel (The Help), Rachelle Lefevre (Twilight), Dean Norris (“Breaking Bad”), and Colin Ford (We Bought a Zoo¬). 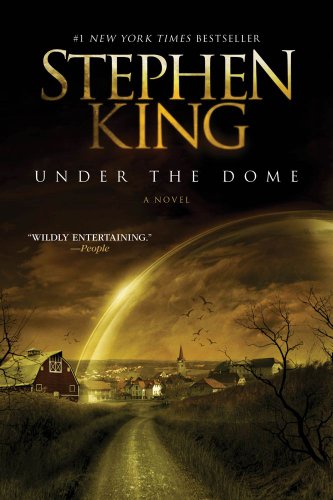 Favorite Quote:
"Do not go gentle into that good night. Rage, rage against the dying of the light" --Dylan Thomas

View profile
Omg! First of all great review, again, and second of all GONE is like the best series ever! If u like sci fi u will LOVE this. There is like five books and they're kinda long but totally worth it I mean honestly. U can't go wrong with a dome. Lol great job
Mckay ELITE said...
on Mar. 19 2013 at 1:59 pm
Mckay ELITE, Somewhere, Virginia
146 articles 0 photos 2230 comments

View profile
First, thank you for liking the review. Second, i have heard about Gone yet I didn't know much about it. Sounds interesting. Thanks for mentioning it. By the way, I messed up with Lee Child's quote it "from" not "form". I always mess up with the two words for some reason.
EPluribusUnum DIAMOND said...
on Mar. 18 2013 at 8:35 pm
EPluribusUnum DIAMOND, Woodbine, Maryland
59 articles 24 photos 280 comments

Favorite Quote:
"I shut my eyes and all the world drops dead;
I lift my lids and all is born again.
(I think I made you up inside my head)."
-Sylvia Plath

View profile
That could be an interesting series. I liked this review, I'll have to read the book sometime as it sounds interesting. Have you ever heard of the YA Sci Fi series Gone? They have what sounds like a similar plot, with kids being trapped under a mysterious dome and struggling for power.