Recommended for fans of the themes: Student-life, Shounen, Comedy, Romance

Ever wondered what it was like to make a comic-book?
Moritaka Mashiro used to aspire to become a manga artist like his deceased mangaka (manga creator) uncle. Several years after his beloved uncle’s death, Mashiro, an average junior high student, believes that one should live as ordinary life as possible. Ordinary meaning: graduate school, go to college, and work in an office. However, Mashiro’s classmate, the class genius Akito Tagaki, convinces him to collaborate with him on a manga that will be published in Weekly Sh?nen Jump (a prestigious manga magazine). With Mashiro as the artist and Takagi as the author, these two boys will realize how truly difficult it is to get a manga published, along with facing problems of romance along the way.
Few successful manga series have been created using a partnership such as the one used between Ohba and Obata. The two makers of Bakuman were able to combine their separate skills into an interesting shounen manga. The story, although with a few flaws, is noteworthy, and it’s able to appeal readers who like to get a sense of realism in their books, but still contains separate aspects commonly found in manga. The uses of serious and comedic tones are seamlessly blended, presenting the different elements into a unique combination. The main characters have a good basis for further definition, presenting a surprisingly mature view on school students, but it left me feeling that there should be more depth presented in these characters in the further chapters. The author also didn't impress me with the lacking amount of female figures in the narration. However, the first volume of this series shows promise for further development of the emotions and themes of the plot. This work of fiction is fairly realistic-looking for a shounen-manga, separating itself from the usual amount of blood-and-guts shown in action manga, it’s a fact that should blend well with people who enjoy reading more lifelike works of fiction.
The dashes of information on the world of manga creation and publishing completely intrigued me; Bakuman would be particularly enjoyable for those who are interested in the business, psychological, and artistic aspects of the manga and anime industry. The manga is informative, yet it’s casual enough to enjoy for some light reading. Overall, a graphic novel that will be enjoyed by a wide range of audiences, old or young, manga geeks or not. 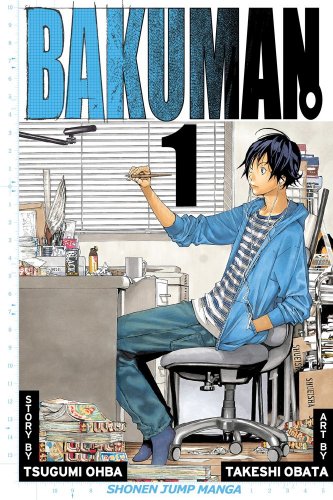