“Where do demons get their diplomas?”

Many standard schools often offer classes after dark, but P.S.13W is a definite exception to the norm. Not only do the classes occur during the nighttime, but the school also provides programs for students, including vampires, werewolves, and weirns (a particular breed of witches). One particular teenage weirn named Alex, who’d previously been homeschooled, must find a way to access this school. A mysterious setting surrounds the school and the students in it. Alex, several Nightschool apprentices, and a group of students training to be Hunters (a supernatural group of beings) have to figure out what’s going on and stop it before their lives are irrevocably changed for the worse…


Nightschool is an amazing work of OEL (Original English Language) manga. Chmakova has created a world that somehow maintains the feel of fantasy and excitement presented in novels like Harry Potter, but with an urbanized New York setting. This novel, while containing a few scenes not meant for the light-of-heart, generally maintains a entertaining and twisting plotline. This manga has a wide range of themes, agreeably mixing together comedy and horror, an aspect that will work well with those for an affinity for fictional writing. The art style is similar to those of American comic-book artists, presenting well-detailed distinctly shaded scenes and characters, although the paneling and flow of the story is more similar to those of Japanese manga novels. Also, while the subplot involves several dramatic and action-filled features, includes maintains an entertaining and comedic aura.


Nightschool would be enjoyable to those looking for a literary escape from reality. 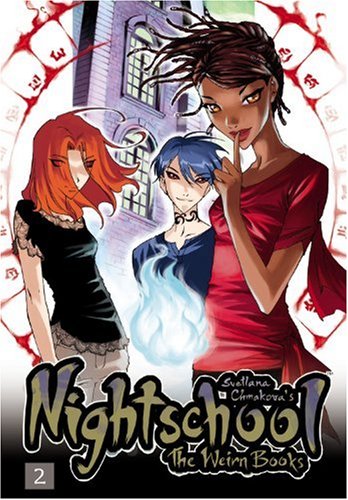