Out of Sight, Out of Time by Ally Carter | Teen Ink

Out of Sight, Out of Time by Ally Carter

In the latest book of the Gallagher Girl Series, Out of Sight, Out of Time, New York Times bestselling author, Ally Carter, tells the story of a seventeen-year-old spy-in-training named Cameron Ann Morgan (or just Cammie) who goes to a special spy school for girls called the Gallagher Academy. In this exciting novel, Cammie, the protagonist, wakes up to realize that she is missing four months of her life and that she is the target of a dangerous organization that won’t hesitate to kill her. She has no memory of what happened to her during those months. All she knows is that she has gotten herself involved in something risky that’s way above her level of clearance. The excitement rises in each chapter as Cammie and friends travel to different places to retrace her steps and try to figure out a mystery that has trained operatives confused.

Author Ally Carter describes the characters in two ways, describing them from the points of the people close to them and from the points of the people who don’t know them very well. Cammie is described as a girl and a spy. To other people, she is a spy who can’t be trusted. To her friends, she is a girl who just needs help finding out what happened to her so that she can fully understand things. One trait about Cammie that gets the story moving is her curiosity. Cammie’s need to know everything often gets her into trouble with her mother, the principal, her friends, and her Aunt Abby. By knowing things that she should not, Cammie gets herself involved in difficult situations. Cammie is also stealthy and intuitive. This saves her from danger most of the time. It’s also why she’s called “The Chameleon.” Blending in with the crowd and sensing danger saves Cammie’s life multiple times in not only the book, but the series.

Despite the dangerous theme and the seemingly serious conflict, the book is full of humor and sarcasm. It was hard to put down. Each chapter flows into another. Nothing is missing or explains too much. However, I feel that the book is a little different from the other four books in a negative way. In this book, Cammie and her boyfriend, Zach, don’t get to talk face to face much. Instead, Cammie gets jealous of his relationship with her best friend. I felt that this problem wasn’t completely resolved and that the author left me confused when it came to Cammie’s romantic life. However, it gives more room for the adventures and other relationships. Cammie’s relationships with her best friends, Rebecca (Bex), Liz, and Macey, are described more clearly in this book than in any other book.

Cammie’s lists and reports listed throughout the story lighten up the mood of the story. Sometimes, the tone would go from a depressing one to a light and funny one. I would be laughing while crying my eyes out. Cammie’s reports are funny. They usually come before or after she goes on a crazy or dangerous adventure. The reports lighten the mood. For example: “At approximately 0900 hours on Saturday, October 14, Operative Morgan was given a stern lecture by Agent Townsend, a tracking device by Agent Cameron, and a very scary look from Operative Goode. (She also got a tip that her bra strap was showing from Operative McHenry.)”

It was exciting exploring all the secret passages in Out of Sight, Out of Time by Ally Carter. If you like contemporary spy stories with action and romance, then this book is definitely for you. It will have you imagining that you’re right in the middle of all the espionage and conspiracy. 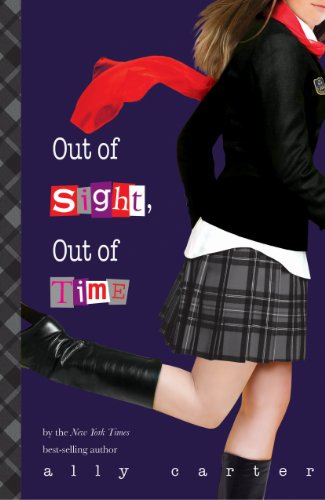 Favorite Quote:
"Impossible; for How many people did you know who refracted your own light to you?” - Fahrenheit 451

Favorite Quote:
"Impossible; for How many people did you know who refracted your own light to you?” - Fahrenheit 451

View profile
I read this book, and I agree! But how come they mentioned Josh, just to have him thrown out again? I was also a little confused about her romantic life, because Bex would never betray her like that, and neither would Zack. And about the lists, I think my favorite kinds of lists, anre the pros and cons! They were always really funny.
I'm very glad that everything was resolved (for the most part) at the end. It didn't leave me hanging so far that I fell of the cliff, but it did make me want to read the next book. If she's writing another one.
(P.S. If you like this, check out the Alex Rider books!)
ChobaniLuvinPenguin PLATINUM said...
on Oct. 31 2012 at 4:27 pm
ChobaniLuvinPenguin PLATINUM, Brooklyn, New York
29 articles 0 photos 85 comments

Favorite Quote:
"What makes the desert beautiful is that somewhere it hides a well."
― Antoine de Saint-Exupéry, The Little Prince

View profile
Irene, I love this review! You did a wonderful job portraying the characters, genre, and different aspects of the book! Your review flows well, is fast-paced, and is very intriguing! I'll be sure to check this book out. :)