The Scorch Trials by James Dashner

“Thomas’s hand instinctively went up to his throat, as if a soreness there were the first indicator that he’d caught the Flare. He remembered all too well what the woman on the rescue bus had told him after the Maze. About how the Flare destroyed your brain, slowly driving you insane and stripping you of the capacity to feel basic human emotions like compassion or empathy. About how it turned you into less than an animal.”

Thomas and the Gladers thought they were done with the games when they escaped the Maze. They solved the puzzle, they broke free, and they were taken to safety.

The Maze was only a small part of the trials they had to go through, and what’s in store for them makes the Maze seem like a cakewalk; at least before they knew they had food, water, and shelter. Now the “game” is more dangerous than ever. The Creators want them to cross the hottest part of the earth – the Scorch – to get to the safe haven on the other side in two weeks. But the desert isn’t the only thing that stands in the way of their freedom; to get to the haven, they have to pass through a town littered with Cranks – people dying from the Flare, a horrible, deadly, contagious disease that slowly turns its victims mad before finally killing them. The Gladers have to get to that haven, otherwise, the games will end for them. Permanently.

The Scorch Trials was an improvement over Dashner’s first novel in the series, The Maze Runner. Maze read like it was Dashner’s first novel, but his writing style definitely improved and become much smoother from the second to the first. Scorch also moves much more quickly, and I never felt bored as I was reading it, as I had frequently with the first book. However, Dashner still leaves the reader wanting more – too much, in fact. He brings up way more questions than he answers, and I found I was frustrated with the mystery surrounding not just this book but the entire series as a whole. I would recommend this book for eighth through twelfth grade students, but Scorch is certainly not a “stand-alone” read – be sure to read The Maze Runner before attempting this one. 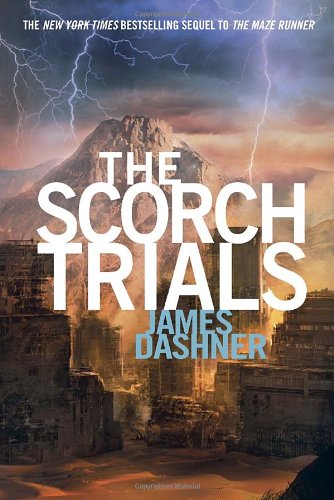