if i stay by Gayle Forman | Teen Ink

if i stay by Gayle Forman

Mia's life and dreams of becoming a famous cello are shattered by one car ride gone wrong. Mia and her family were heading to one of their close friends house when tragic hits. Mia's family's car collides into another, leaving a tragic ending. Mia is thrown from the car. Scared, cold and confused Mia is left standing on the side of the road, still trying to absorb what happened. After wandering around a little Mia finds her parents, dead. And then what she thinks is her brother (Teddy) lying on the side of the road. As Mia walks closer she realizes that it wasn't Teddy lying on the side of the road, it was her. Mia's own body was lying limb, broken and bloody on the side of the road.
Then before Mia can even take a step away she hears sirens.
Mia's body is rushed to the hospital and she follows after her body, forgetting all about her brother. Later at the hospital after she hears that her brother was also taken to a hospital, but he wasn't in the same one as Mia so she couldn't see if he was all right.
Later on in the hospital Mia starts to wonder where her boyfriend (Adam) is and then she starts to wonder why she was outside of her body. Then finally to Mia's relief Adam arrives, and her best friend (Kim). Mia is so relieved and happy to see them, but then the one of the nurses on watch wont let them in to see her. Kim and Adam make a plot to see Mia. But it fails.
Kim and Adam are taken away by a nurse, Mia follows them, where they run into Willow (one of Mia's family's closest friends, the one that they were going to visit). But then Mia remembers that the hospital that Teddy went to was Willow's (Willow is a nurse) and that Willow would never leave Teddy.
Mia realizes that Teddy is also dead and starts to wonder if there was anything left worth living for. Things happen to her body and she dies on the operating table, but then comes back.
Her family pays her a few visits and then Adam visits after Willow has a little talk with the nurse. Then Mia has to make the biggest decision of her life; whether she wants to live, or die.

if i stay is one of those books that will stay with you for a long time. The writing was great and Gayle Forman did a spectacular job with the book.
Now I know the description of the book is long, but that is because there is a lot to tell and in the book there is a lot going on.
There is a lot of language in the book that I don't really think was needed, but it showed the parents personality a little so that's why I tolerated it.
The best part about the book for me was that Mia thinks about her past to try to figure out whether she should live or die. And also that Gayle Forman explored this subject and I think what she wrote could be true to an extent. Say if you were on a car crash like Mia was, and your injuries are really severe. Your lying limb and semi unconscious in a hospital bed. Your mind is still thinking, you can hear and feel everything around you, but you can't move. Don't you think its YOUR choice whether to live or die? 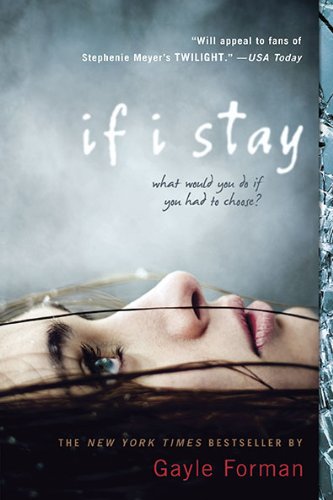 
Buy from Amazon
The author's comments:
I love this book its still my favorite one on my bookshelf and I think its going to stay that way for a long time.
And one more thing: I don't have the book title in capital letters because on the book cover they are in lowercase. :)
Thank you for reading my review!!!
Post a comment
Submit your own