“Abandon all hope, ye who enter here” is a warning that appears at the gate of the Inferno. Dante Alighieri, the poet, pilgrim, and politician, leads the journey as the narrator. Vivid portrayals of sinners in each circle contribute to the pursuit of retributive justice (“contrapasso”). After Dante (known by his first name) was exiled from Florence, Inferno was created with subjective views about popes and their power. In the piece, Dante constantly changes his perspective of narration, even directly talking to readers at times. Through the journey of Dante the Pilgrim, readers witness the progression of his growth from innocence to maturity. As a result, the metamorphosis of Dante the Pilgrim elucidates the inscription “Enter to grow in wisdom.”

Dante the Pilgrim finds himself lost in a chaotic setting of dark woods, which emphasizes his innocence at the beginning of the journey. When Dante the Pilgrim wakes up, he tries to escape but is impeded by three beasts; “[he] died from every hope of that high summit” (Canto I, stanza 18). With constant failure, the Pilgrim struggles with the situation and almost abandons his hope of fleeing this grim place. In this case, the Pilgrim is innocent, as he is lost in the woods with no cognitive means to plan an escape, since the wilderness lacks order that opposes intellect. Then, Virgil appears as someone who will guide the Pilgrim through his journey in the Inferno. When the Pilgrim recognizes where he should go, he observes, “I hung back and balked on that dim coast” (Canto II, stanza 14). Immediately, he is struck with fear that makes him doubtful. Hesitancy emerges even at the beginning of his journey, which demonstrates the Pilgrim’s lack of intelligence and abundance of pathos. In contrast to Dante the Pilgrim, Virgil has been chosen to be his guide because he has long been in Limbo and is thus quite familiar with and knowledgeable about the journey through the Inferno. Along the way, Dante the Pilgrim succumbs to pity for the helpless souls he encounters and faints, while Virgil, seemingly accustomed to this environment, remains emotionless. It can be concluded that Virgil’s intellect underscores the core difference between the two, which is why their reactions are so different from the very beginning.

Leaving the Inferno, Dante the Pilgrim becomes Dante the Poet (narrator), to recount the journey and include his observations to reinforce the impact for the reader. “But since it came to good, I will recount: all that I found revealed there by God’s grace” (Canto I, stanza 3). At the beginning of the first canto, Dante the Poet explains that the poetry is meant to be a recollection of his journey. In the Second Circle he tells us, “I learned, was the never-ending flight of those who sinned in the flesh, the carnal and lusty who betrayed reason to their appetite” (Canto V, stanza 13). Dante the Pilgrim associates love with birds and illustrates that obsessive desire leads to death and punishment in the Inferno. Having gotten out of Hell, Dante the Poet seems to prompt readers to be careful about the consequences of lust. As Dante the Poet constantly retells the journey in each circle, readers are able to determine the punishments for their erroneous actions. As a result, Dante the Pilgrim departs from the Inferno to serve his country and mankind with measured actions. With an omniscient view, readers are able to see the punishments their souls will face after leaving the physical body and waiting for the Judgment Day. Playing the role of poet, Dante as narrator consistently cautions society about every situation that individuals could encounter. Since the environment of each circle is depicted so vividly, the narrative presents a stressful and horrific tone, which causes people to project the consequences onto themselves and in turn, motivates them to start taking corrective action.

Throughout the journey, explanations from Virgil support his character as a representation of wisdom. This creates a clear comparison between Dante the Pilgrim and Virgil the Guide, and along the way out of the Inferno, it reflects the growth of the Pilgrim. Strikingly different from the Inferno’s resident souls, Dante the Pilgrim is a living character whose nature could be sensed by each soul he meets in the Inferno. Despite the utterly hopeless warning at the gate of Hell, Dante the Poet eventually comes to better serve his country and society.

For those who find themselves in a situation similar to that which Dante the Pilgrim faced when he was lost in a dark wood at the middle of his life, it is worthwhile to consult the lessons of the Inferno, which is far-reaching as a reminder of reality. At the age of 18, Dante brings readers into a brand-new world, growing from innocence to maturity. Numerous allusions to life circumstances are essential to support the theme of the Inferno. It is thus equally important to consider the lessons of the more experienced guide, the very knowledgeable and practical Virgil. 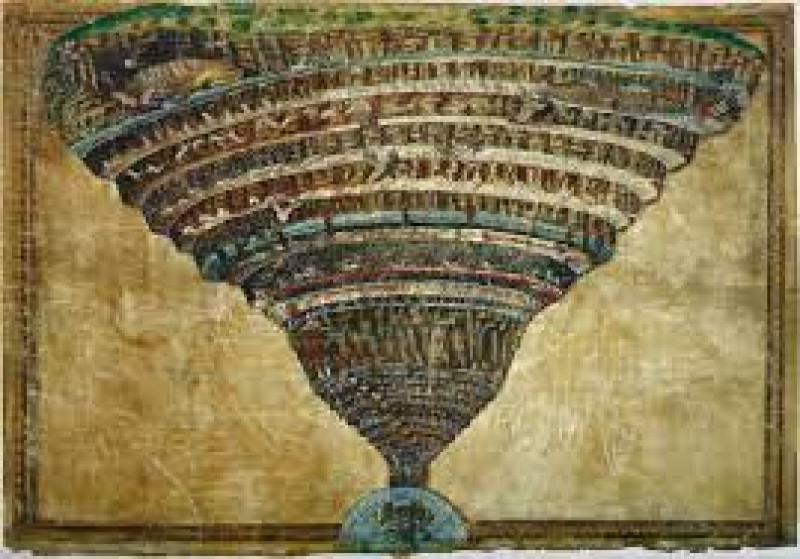