Favorite Quote:
And still I rise.

I know Im crazy. I am well aware of the fact that my mind is unable to behave as the normal mind, the right mind. I see things - people that others don't. I hear things - voices that others can not comprehend. This is because the people I see, the voices I hear are not people or voices at all. They are simply a side effect, a side effect of being insane. There is no medicine or treatment to make the side effects disappear forever, only to allow them to fade and come back another day.

However, there is one thing - one person who is not a chess piece in my game of madness. He is real, I know it. Despite what my doctors say, I am positive that this boy is real. His heart beats just as mine does, just as the normal - the right heart beats. I have only seen him in the night. His smooth tan skin sighs endlessly, his eyes glisten and his thick brown hair slightly bounces as he speaks his words filled with the rhythm of an untold story.

He speaks only of his memories, never his label. He tells me how he grew up with an older brother in a town near the mississippi river. His parents were in the picture but mostly on the frame, allowing him and his brother to become very close. The boys spent most of their time at the community theater downtown, volunteering their assistance and picking up minor parts in the productions whenever an open spot represented itself.

I know more about him then I do myself, mainly because I do not know myself very well. It is hard to study a subject that isn’t quite a subject. Still, I let myself believe that the boy that is real and I are very close. He has told his secrets and I have told mine. The only secret he still holds delicately in his hands, is his name. The melody at which people sang to him, the note at which he was called. It is simply a ghost, dead and unable to see. I have asked several times and he has answered never.

Though, I do not need to know his name to know him and that is, in fact- real. I will stand behind this till the day I pass that the boy who visits me in the darkness of the hour is in fact a true human - a piece in the puzzle of reality. The boy who seeks me when the world is asleep is just as realistic as the women that gave me life. The boy takes no part in my madness or fantacy. He is invisible in the peaks of my insanity.

I can see his face. It is clear and persistent, unlike the transparent appearance of a side effect. His voice is smooth and obedient to a steady tempo as to the voices of a side effect, which are hasty and scrambled.
He is real. He is reality. He is realistic. 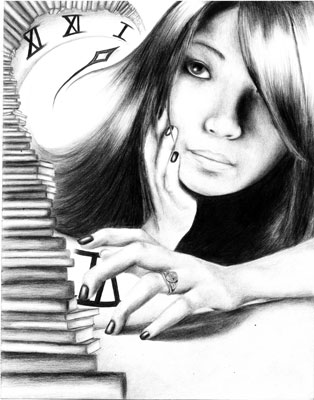 The author's comments:
The voice in this piece struggles to see what is reality but feels that there is at least one thing in her life that is real and that is a man who no one else sees.
Post a comment
Submit your own