An empty canvas is to be embellished with vivid and vibrant colours
A sharp, dark pencil sketches the artist's story.
He draws his brush when those thoughts and emotions smother
his heart and soul, as he mixes the colours in his palette of memories.

Lines and curves of time and space stretch throughout his canvas
He becomes a story teller in the most extraordinary way.
He paints incessantly, as if he's driven by a strong animus,
telling tales through his pictures, different ones, lucid ones, never selfsame.

He dwells behind closed doors, but his own world is immensely vast
The gateway betwixt the two worlds lies in what he creates.
Reality is harsh sometimes, so art becomes his escape
In his world he often travels alone, but sometimes he invites others too.

The seen he creates, also the unseen that only he sees
His rough and askew paintbrush invariably travels with him to many worlds,
so he could show others the wonders that he perceives.
Nay, he's no lost soul, he's only been to places beyond his own.

He's a traveller in the fantasy worlds, maybe he's even a dreamer,
who desires his masterpieces to irradiate the fire in his heart for art,
Burning brightly, burning passionately – enough to warm the spectator
And quick to burn the ignorant.

His creativity is inexhaustible, as he dips his brush in the rich colours and advances to create another masterpiece,
He paints whatever comes to his mind, improvisation at it's best.
Raging, mixed, unstable emotions move around chaotically through his body,
through his mind, it destroys every world he's ever known, needless to say, that painting was his last.


To the posterity, he - the artist, is a great mystery even though he's no more
His legacy, however, is eternal, it has lived to this day.
Little is known about him, but millions of stories his artworks narrate,
stories about him, his life and his miscellaneous worlds,
also his love and zeal for art, they emanate. 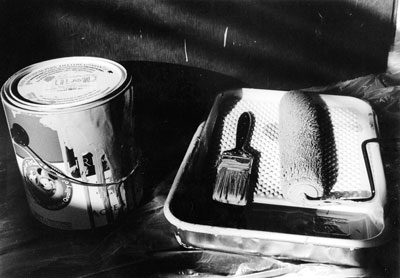 The author's comments:
An extremely passionate artist finds peace in his love for art. He paints when he's buoyant and when he's lugubrious. In his dark days, it becomes difficult for him to find his harmony, so he paints constantly in order to seek it, but his work only reflects his anger and helplessness. In the end, he is crushed by his self and loses his sanity - which leads him to forsake the thing that he loved the most - art.
Post a comment
Submit your own

Favorite Quote:
"Never let the odds keep you from doing what you know in your heart you were meant to do." H. Jackson Brown Jr.

Favorite Quote:
I find hope in the darkest of days, and focus in the brightest. I do not judge the universe.
Dalai Lama

View profile
agreed ^^^
Lucifer666 said...
on Apr. 20 2014 at 11:39 am
Lucifer666, Hell, Other
0 articles 0 photos 63 comments
View profile
I was extremely excited to read this piece, until I read the author's comment. It was a spoiler for me, because you told exactly what happens throughout this piece. Nevertheless, your writing was amazing. Your vocabulary is impeccable, and your words flow smoothly. Your descripting details gives this piece its eccentricity, especially the imagery in here. "Lines and curves of time and space stretch throughout his canvas He becomes a story teller in the most extraordinary way.  He paints incessantly, as if he's driven by a strong animus, telling through his pictures, different ones, lucid ones, never selfsame" this is my favourite line in the poem, but there is a redundancy in it, you say different ones, and then say never selfsame. I would suggest changing different, to avoid this. And, I was disappointed about the inclusion of the author's comment, because I wanted to try and figure out what was happening in this writing, but tour comment limited the possibilities. I'm just one person, and I'm just explaining why I was disappointed.  As aforementioned, try and avoid redundancies, but extremely well penned.  (I would also suggest, next time if there is one, dont reveal everything in the authors note, it took away my excitement to read this. And I try to leave lenghty comments to get all, or most of my thoughts out, so sorry for leaving a novel on your piece XD)