He was a tall man, says the length of his jeans
lying on the floor of his bedroom;
a thin man too, says the size of his shirts
hanging in his closet; and a man of science,
says the On the Origin of Species book lying
beside his unmade bed with dog-eared pages;
but not a man for love, says his empty contact list.

He owned a camera, say the many pictures
hanging on the walls in the living room, and
he liked to paint, say the paintbrushes lying on the
coffee table. There was a girl, says the jacket
slung over the back of the couch, they were close,
says the picture of them, hand in hand, sitting on top
of the television, covered in dust.

Something changed, says the empty driveway.
Vacant houses, say he was not the only one
to disappear; broken glass from the car window,
says he was not easy to catch. As for the girl?
Two empty front seats and one shoe left behind, say
she had disappeared too. Something had changed, they say. 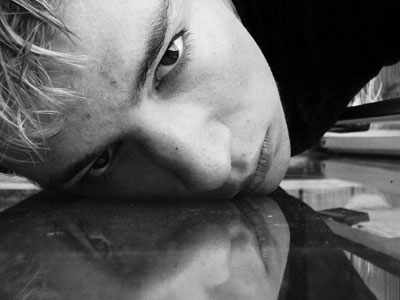 View profile
Well written piece~ I liked the way you described the man by his possessions---things he owned, his surroundings. These are the things you discovered without even meeting him. Amazing!
alwayssunshine PLATINUM said...
on Aug. 4 2010 at 5:39 pm
alwayssunshine PLATINUM, Charlotte, North Carolina
24 articles 5 photos 147 comments
View profile
Well, I like it! Nicely done!
Syarra_Greenwood BRONZE said...
on Jun. 14 2010 at 12:03 pm
Syarra_Greenwood BRONZE, Andover, Ohio
2 articles 0 photos 23 comments

View profile
wow i started to read that because i thought the name sounded weird and now its got me rlly thinking. i really liked this article and hope you keep it up cause it sounded really good! (: