I once met a girl who wrote suicide notes.
Unpublished, yet well written; hidden deep in her throat,
Were the cries from lies that turned dark her bright eyes,
And why I despise those now darkened eyes,
I cannot say, relay, relate, or reply,
Only pretend that the end didn’t happen and lie
About the dead night time message that whispered, “Goodbye.”

I suppose it began by the sea and it’s sand,
Where the winds swept the land and it’s sisterly shore.
It was there where I was reading, that I noticed her peeping.
She smiled before speaking of Keating, Poe and Thoreau.

I shook, stuttered, and muttered while my heart flew a flutter,
And swore upon my mother I’d know no other lover,
And so it began, us, star-crossed as can be:
Sitting neath the sun, beside her green saintly sea.

Then the tides changed and our love grew rather strained,
And drove us mad with rage with but ourselves to blame.
And on a dark night, we sat beside the tide,
Where we would no longer hide from the sadness deep inside.

She sighed, I lied, we both died inside,
And cried and flied to the tip of the sky.
Which is where we withered and wuthered where we lie;
Two broken souls: destitute and dry,
Sitting there in our palace made of storm clouds and skies.


I awoke in the sand; arose, feeling grand,
Till I saw, dug by hand, something written in that sand,
I cried to God why, but the angels just replied,
And said she just died; committed suicide.

And that was our tale, here I rant and rail
And regale with details of dreams, thrashed and derailed;
All dwarfed by scale to my time by the sea;
Where our love grew and flew, my Sylvia and me. 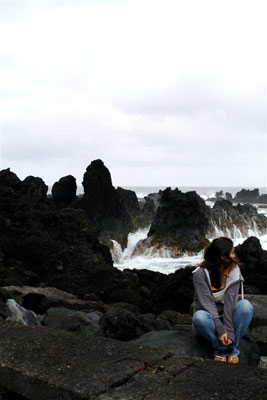