As of January 2018, approximately 552,830 people were counted as homeless for any given night in the United States (White House Gov). With homelessness on the rise in states all over America, the stigma associated with it only makes it harder for those trapped in the system to find a way out.

In a study done by the US National Library of Medicine on over 119 homeless individuals, the findings “suggest that the experience of group-based discrimination may hinder connecting with groups in the broader social world — groups that could potentially protect the individual against the negative impact of homelessness and discrimination.” In other words, those experiencing homelessness are subject to limited opportunities and protection as a result of outside discrimination.

This discrimination is rooted in many widely held stereotypes targeting the homeless. Of them, one of the most commonly held stereotypes is that those who are homeless are the ones at fault, and they have put themselves in their own dire living circumstances. It can be easy, however, to separate yourself from someone living on the street and believe that they’ve somehow done something wrong; in reality, any small mistake or unfortunate event could lead anyone to homelessness.

The world-renowned blog- Invisible People– documents the lives of the homeless all across the globe, and hearing these stories convey just how difficult it is to escape the cycle of homelessness. Take Shaun P for example, a 19-year-old sleeping on the streets of London. After his father died and his mother hospitalized shortly after, Shaun was left without a way to pay for rent and was soon cast out on the streets. With his shoes stolen after his first homeless night, he was forced to learn the tough ways of street life that 150 million other people across the world continue to experience each day.

What Shaun’s stories and so many others speak to is just how important it is to eradicate the stigma behind homelessness- especially when there isn’t enough education surrounding just hard it is to escape it from the very bottom rungs of society.

The Correlation Between Homelessness And A Lack Of Affordable Housing
If the homeless aren’t always directly at fault for their living circumstances, contrary to the widely-held stereotype, then what are the main reasons why homelessness rates continue to skyrocket?

The biggest reason for this phenomenon is easily attributed to the lack of affordable housing. According to the National Low Income Housing Coalition, as the cost of rent has continued to rise over the past 20 years (an increase of 41% in rent just from 2000 to 2009 for a two-bedroom unit), the average income for low-income families has continued to decline. This in turn is forcing more and more people to be at risk of homelessness.

Why can’t these families seek housing assistance or refuge in shelters? First off, the immense demand for housing assistance amongst the millions of low-income households creates extremely long waiting lists (an average of 35 months long) for the limited supply of grants to be given out. In fact, according to researcher Jennifer Daskal, only about a third of low-income households receive a housing subsidy from the government.

Those still stuck on these waiting lists who can’t afford the rent of their homes are left with no choice but to seek refuge in homeless shelters. Homeless shelters, however, are not always as viable as many may think. “Severe overcrowding is the underwater portion of the homelessness iceberg – we can see the increasing number of New Yorkers in shelters, but we can’t always see an immense and growing crisis of affordability that puts them there,” says Benjamin Dulchin, executive director of the Association for Neighborhood and Housing Development. “For a family, severe overcrowding often comes a step before a shelter application when they are evicted from their apartment and spend a period doubled-up while they exhaust their affordable housing search options.”

With many homeless shelters dangerous, unsanitary and overcrowded, they’re oftentimes not much better than living on the streets.

To start off, there is a strong correlation between homelessness and mental illness. With over a quarter of the homeless population suffering from a serious mental illness — such as depression, schizophrenia, or bipolar disorder — that proportion continues to grow each year (Harvard Health). Alongside poor mental health, usually caused by trauma, there is a great lack of resources for addiction help. With high rates of alcohol and drug use clearly prevalent among the homeless, the combination of poverty and addiction only makes it harder for the homeless to find supportive housing, effective treatment, and a way off the streets.

The next factor, domestic violence, is another topic often stigmatized in society. Women from abusive relationships are left with the decision to remain where they are or to turn to the streets. Abuse can be so traumatizing that many women end up choosing the latter. According to a multitude of studies on the relationship between homelessness and domestic violence, more than 80% of homeless mothers had reported previously experiencing domestic violence. In fact, between 22 and 57% of all homeless women reported that domestic violence was the main cause of their homelessness (Wilder Research Center). With no other option for themselves or their children, homelessness is oftentimes the only escape.

The last reason- the lack of affordable healthcare- ties back to the recurrent issue of worldwide poverty. With over 86.7 million Americans uninsured- four out of five of those being working families – a sudden unexpected illness or accident could lead any working family on the road to homelessness. In a study conducted by the Agency for Healthcare and Research Quality, researchers found that homeless individuals are 4 times more likely to be hospitalized than the general population. With a greater need for healthcare treatment and not enough money to afford it, how are the homeless expected to get the treatment they need?

Overall, there clearly are an overwhelming number of factors that play into rising homelessness rates. Being aware of them can help to combat the stigma surrounding the issue, and understand what’s leading people to the streets in the first place.

Why Common Stereotypes Don’t Cut It
“Aren’t all homeless people addicts and criminals?”

“But there’s so many services to help and protect the homeless.”

“Why can’t they just get a job and earn money?”

The infamous “they should get a job” stereotype seems to appear in every conversation surrounding homelessness. Even when individuals may understand the varying factors that could lead someone to be without a home, there still isn’t enough education surrounding why it isn’t so simple to get off the streets.

“Imagine sleeping in a room with 30 other people,” explains volunteer organization, Preble Street, in an article on fighting homelessness. “Some are snoring; some might be hearing voices and talking out loud. You don’t know any of them. Your bed isn’t very comfortable and you might have heard rumors about bed bugs. How well are you going to sleep? Then you have to get up the next day at 6am after 2 to 3 hours of broken sleep. No sleeping is allowed during the day at the shelter. You may go to the library to snooze for a short period of time. You walk around town looking for something productive to do, but you are so tired you have a hard time focusing. Depending on where you live, you might have to be constantly on guard of being harmed by others, or having your belongings stolen etc. You might apply to some jobs, but because you look disheveled and tired during the interview, they don’t hire you. In addition to all these obstacles, you might develop more illnesses from living in a shelter.”

With little to no belongings, limited access to helpful resources, and no home address, it’s very unlikely that many candidates will be hired. Not to mention that mental illness and diseases are very common with homelessness- resulting from overcrowded homeless shelters, unsanitary living conditions, past trauma, and a lack of resources for treatment. How will these individuals simply “get jobs?”

Finding Solutions And Ending The Stigma
With all this said, there are many misconceptions around homelessness because of the lack of education around the topic. Living in a time where different minority groups are finally coming out and speaking about their past discrimination, it’s vital that we direct this new awareness towards all groups of people.

Even as the younger generation, there are still many ways we can directly combat the stigma surrounding homelessness and take steps forward. It could be advocacy; calling local homeless shelters, organizing food drives, or writing editorial letters to local newspapers about the pressing issue are all tangible ways to make an impact. It could be volunteering; shelters, food banks, and soup kitchens are all great places to get involved and give back to the community. It could also be donation; whether it’s old clothing, books, blankets, or cans or food, there is always something lying around at home that can be put to good use and donated.

As long as the stigma is still there, we will never be able to maximize solutions for the growing homelessness epidemic. There are a number of solutions already being put into place, and they will only be strengthened the more awareness that we can bring. 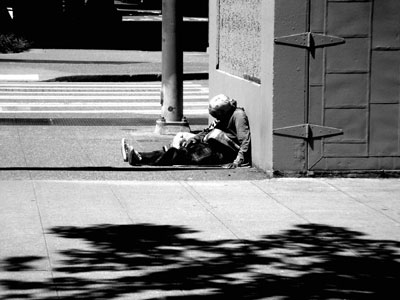