Heya, my name is Clinton and I’m going to tell you about a certain topic I absolutely love and adore and that topic is… Dinosaurs!!! Yes dinosaurs one of the coolest things on the planet and probably the whole universe. Dinosaurs come in many many different shapes and sizes like a carnotaurus or even a tyrannosaurus rex! For the people who didn’t know tyrannosaurus rex means “Tyrant Lizard”.

Most dinosaurs walked on a gigantic land mass named Pangaea, swam in the vast deep blue ocean, and some even flew way up in the sky’s of earth. Some of those types of dinosaurs that swam are the Kronosaurus, Ichthyosaurus, and one of the larges ancient sea creatures Tylosaurus. Others that flew in the skies were the Pteranodon, Pteradactyl, and even the Pterradon. And last but not least the Dinosaurs of land and some are the velociraptor, deinonichus, triceratops, brontosaurus, spinosaurus, and even one named after a state the Utahraptor.

But sadly they became extinct millions of years ago way in the past there are theories people have thought of how they died one of the most famous theories is that a gigantic asteroid smashed right into the earth at a very high velocity some others is that they just ran out of food sources which is very very unlikely to have happened. Some dinosaurs still roam the oceans and trees though like sharks and turtles and birds also as most birds evolved from raptors and the great white shark most likely evolved from the Megalodon. Some other sharks like the tiger shark have a similar look and shape to the Tylosaurus also.

That is the end of my topic of dinosaurs, though I may be back with more information (if I remember to :p).

See ya and thanks for reading I hope this was fun to read! 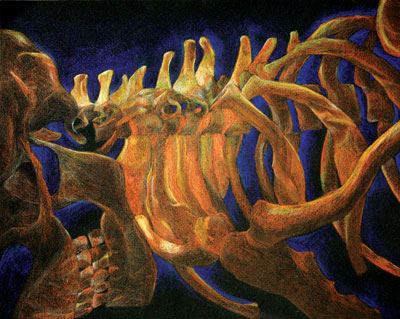 In my schools freshmen english class we were to write a 300 word paper that was about something we loved and i decided hey! i love dinosaurs why dont i write somthing about em so... i did! :D

Favorite Quote:
"Life is not abut the number of breaths you take but about the moments that take your breath away"