Boys Will Be Boys | Teen Ink

Boys Will Be Boys

“Boys will be boys,” or “they're being mean to you because they like you,” are all things every woman has heard before, and we are tired of the same excuse decade after decade. Equality doesn't appear as often as you would imagine. I used to think it was “normal” instead of sexist, racist, or homophobic. We have become so used to these “normal” occurrences that society has convinced us to think that it's okay. So to look deeper, we have to ask the question, “why?” “Why should we have to follow dress codes in order to not distract men. Shouldn’t they just learn how to respect women and control themselves?” “Why should we have to hide ourselves to make men happy?” When you step back and ask “why?” you find what most are too scared to encounter, they are scared because they are terrified of how much they will uncover that they do not want to see. So although we might have the same right to vote, and the same punishment if we speed, we still don't feel safe at night. The question that I am here to ask is “Why should we have to fear being on the street alone at night when men can walk free?” and “Why should we have to be careful about where we step, in fear that a dangerous person might be there, one who wants to hurt us for their own selfish pleasure?” “Why?”

Two out of every three women aged 16-34 have experienced one form of harassment in the last 12 months. That can include catcalls, whistles, and more unwanted sexual comments or “jokes.” This information was provided by the End Violence Against Women Act (EVAW) in the UK, an organization striving for women's equality, and for women to finally feel safe at night. Instead of them having to be worried if someone is going to hurt them, harass, kidnap, or kill them. And because of that women feel unsafe at night. In addition to the idea of feeling unsafe at night, an article titled “New data shows the extent to which women feel unsafe at night” published 24th August 2021 says that Rebecca Hitchen, the Head of Policy and Campaigns at the EVAW. “This data confirms what we know: that violence against women and girls remains a constant threat in every sphere of existence.” Most of the things that we think are “normal” are very sexist and quite unfair. For example, we are constantly alert of our surroundings, especially when it starts to get dark at night we are extra careful. And that's a problem as men all over the world get to feel completely safe at night, while we have to worry. Or we get told what happens to us at night is our fault, simply going somewhere as a woman is apparently an invitation for men to treat me however they want. Just because of how I dressed, the fact that I wore makeup. The idea that I was skinny, or that I was short. That I actively chose to go out. Having any of these makes you more of a target than others in public situations. The EVAW stated “One in two women felt unsafe walking alone after dark in a busy public place, compared to one in five men. Four out of five women felt unsafe walking alone after dark in a park or other open space, compared to two out of five men.” This proves my theory of the fact that most men don't even worry about buying self-defense products as they are so wildly unnecessary for them to carry since they aren’t a target. Now, why do we get targeted?

We get targeted and told things similar to “it's your fault” and that “you were asking for it” because we were wearing shorts. That we wore our favorite crop top or our favorite t-shirt. People should teach men that a skirt is not an invitation to you. We have tried pepper spray, we have the cat keychain that will stab out someone’s eye. We have the rape whistle and the loud alert buttons. We have gotten the hidden pocket knives, the nail polish that will change color if our drink is drugged. We have the stun gun and taser, and we are holding our keys in between our fingers like wolverine claws. We have the dart launchers We have the pens, the 2 for 1 self-defense necklace and tracker, and the kubaton keychains. We are trying so hard to keep ourselves safe. We do the buddy system, but nothing ever works. I cannot even dream of feeling safe at night in an ally, or even on the sidewalk where I’m supposed to be safe. We are exhausted from trying to keep telling ourselves that it will get better someday. It sickens me just how many self-defense products are targeted toward women and how hard we women have worked towards concealing defense items, the nail polish, the lipstick knife, the knife ring. It is overwhelming just how many people fall victim to abuse and sexual harassment even with their defense products on them.

So why are women so scared at night? What happens? Well, you could get drugged, kidnaped, killed, trafficked, assaulted, and abused. We are terrified. An investigation was launched by UN Women UK released on March 10th, 2021, found that 97% of women aged 18-24 have been sexually harassed. And of those 96% of those women never reported it, because they felt like it wouldn't change anything. And a horrifying fact was revealed because of their research. “Every 10 Minutes somewhere in the world an adolescent girl dies as a result of violence.” That is estimated to be 144 daily! This idea of the 97% went viral on the media platform TikTok, first in March 2021, but it has recently resurfaced in March of 2022. It is a trend in which people get the chance to share their stories of getting sexually harassed and to let others know that they are not alone and that they are all striving for equality on all fronts. Emily Badger, a writer for the Washington Post posted an article titled “This is how women feel about walking alone at night in their neighborhoods” on May 28, 2014, in which she states “We forgo a nighttime event because we don't want to travel home alone afterward. We forgo an evening jog because running at night is a luxury only men possess. We forgo a comment or an outfit or a friendship because it might imply an invitation we don't wish to convey.” In which she describes how we were terrified at night. In a study also provided in her article “Between 1973 and 2012, the General Social Survey has asked this question of people surveyed in their home: “Is there any area right around here – that is, within a mile – where you would be afraid to walk alone at night?” She also provided a graph in her article. The graph showed a large number of women who didn’t feel safe alone at night, even in their own neighborhood! And according to the CDC “, Nearly 1 in 5 women have experienced completed or attempted rape during their lifetime. 1 in 3 female rape victims experienced it for the first time between 11-17 years old.”. Now the males in this situation? In the same article provided by the CDC titled “Sexual Violence Is Preventable” they state “ Nearly 1 in 38 men have experienced completed or attempted rape during their lifetime. About 1 in 4 male rape victims experienced it for the first time between 11-17 years old.” This just proves the risk of rape of women is drastically larger than men’s risk. Not saying that it doesn’t happen to men too, just stating that it's much more likely to happen to us females. This brings me to my next point.

We are scared of men because over 99% of sexually motivated offenders are males. Then we come to the “Not all men” movement. It's a movement trying to invalidate the women’s equality movement by saying that not all men are predators. But with the statics i’ve stated during this whole essay it truly seems to be that way. An article titled “Yes all men” from the New York Times, written by Charles M. Blow states that his son was talking about how little he realized the extent of his male privilege. His son also stated “Fighting female objectification and discrimination and violence against women isn’t simply the job of women; it must also be the pursuit of men” The large argument of this “Not All Men” movement is that not all men are dangerous and women shouldn’t be scared of all men. But the idea that not all men are dangerous is a little absurd the preditors aren’t wearing a giant sign stating that they have intent to do horrible things to us. So men tell me, how should we be able to differentiate between the predator and the pleasant? We’ve all heard the saying “I’d rather be safe than sorry,” I would rather assume the worst and still be alive, than see the best and be dead.

The solution? Teach people to not allow it because “boys will be boys” or that “they are bullying you because they like you”. Stop the abuse that will later make sex offenders, this is just fertilizer. Why? Because it teaches men that it's ok to treat women like this, to continuously disrespect women. How do we solve this problem? I think that we should tell young boys that it's not ok to bully anyone, no adult, no classmate, no stranger. We can and should be doing better, we shouldn’t have to be scared for our lives if we accept a drink or walk alone at night. Society should be taking better care of its female members, instead of silencing us and telling us to hush. We should be empowered and feel able to live without the threat of all existing men. So instead “boys won’t be boys” and “that's not ok that they were bullying you, even if they do like you don't poison the entire race of women by your horrible excuses. Let's make it so we never have to hear those sayings again. Let's take a stand for feminism and put an end to terror. 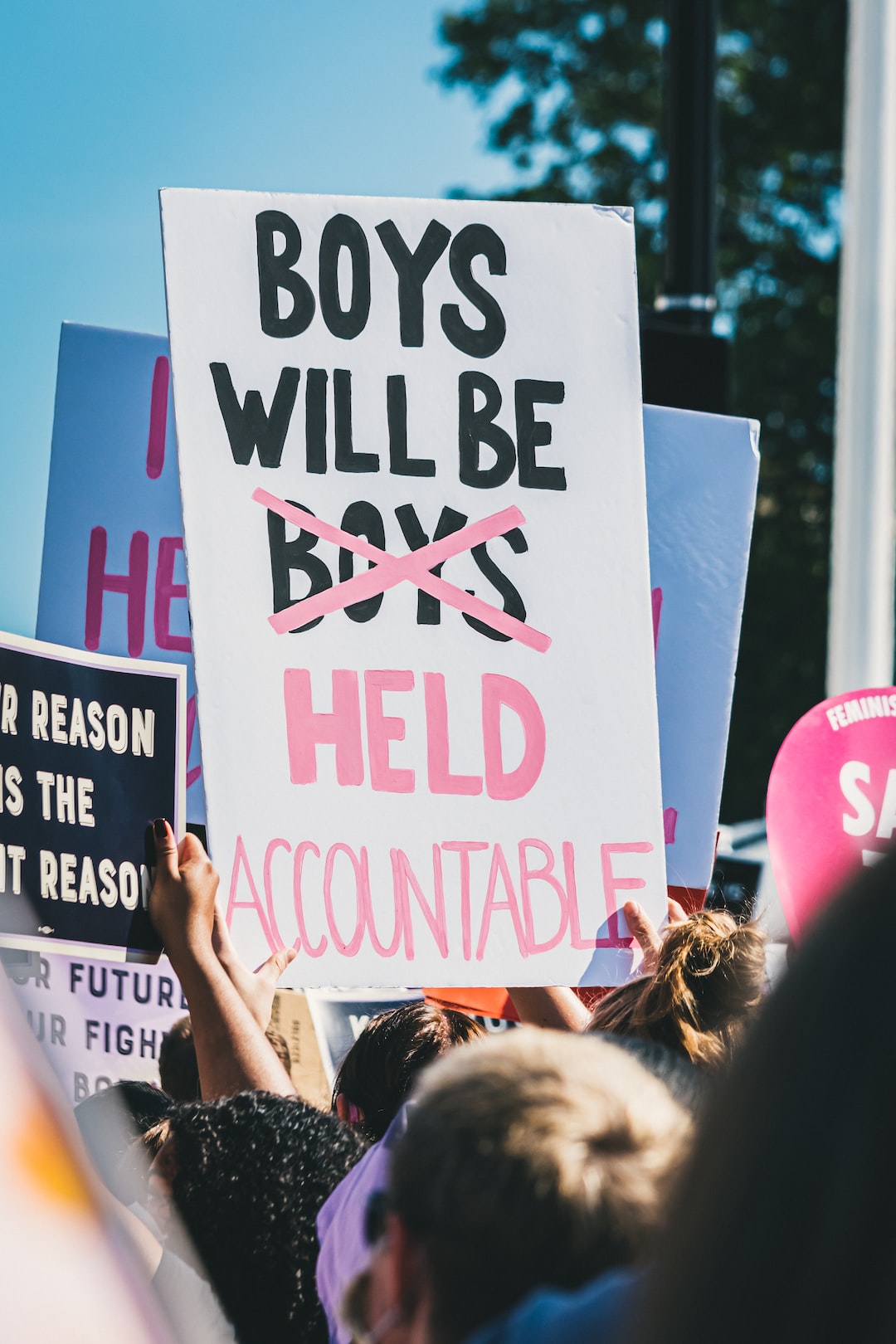 Photo by Gayatri Malhotra on Unsplash

Favorite Quote:
I care very little if I am judged by you or any other human court; indeed I do not even judge myself. My conscience is clear, but that does not make me innocent. It is the Lord who judges me. -1 Corinthians 4:3-4