It's a Jungle Out There | Teen Ink

It's a Jungle Out There

Favorite Quote:
"You are the universe expressing itself as human for a little while." -Eckhart Tolle

King Wen of Zhou in the eleventh century kept a zoo called the Ling-Yu or “Garden of Intelligence.” Diane Ackerman, author of “Why We Love Zoos” (The New York Times 4 Feb 2012) seems to place the same value in visiting and meditating in zoos today. She claims that people do just this because they are “drawn to a special stripe of innocence they hope to find there,” which is slightly ironic considering the atrocities that are commonplace in zoos across the world. Personally, I think people are drawn to zoos today because we are clinging to the last bit of nature we haven’t managed to obliterate yet. We have destroyed their habitats or run them out of their homes, so we conquer these exotic creatures and stick them in inexotic cages in inorganic cities. Ackerman acknowledges that zoos are not a natural world, but feels that they are an improvement on nature. I do not believe observing animals in a cage has the same educational value as observing them in their natural environment. These supposedly educational parks are and have always existed to prove power and wealth. Zoos are not the root of all evil. They are however nefarious in nature because we visit them for deeply disturbing reasons and harbor faulty justifications for maintaining them in our culture.

The common idea that zoos are beneficial to the community because they offer education and a “parklike” setting conducive to “mindfulness” is an inadequate basis for perpetuating them. They may offer an educational environment, with informational signs and guides everywhere, but they are not always correct or one-hundred percent accurate. A CAPS (Captive Animals’ Protection Society) study of a public aquarium in the UK found that forty-one percent of the individual animals on display had no signs at all identifying their species, which completely contradicts a zoo’s purpose of education. Ackerman makes the argument that zoos are a “quiet” and “subtle” place to connect with other beings “without the strain of interacting with people.” There is this notion that the pseudo-nature these wildlife parks create makes for a better tourist experience, makes it easier to connect with the true nature of animals, is preferable to observing these amazing creatures in their natural habitat. This implies that it is more sustaining for the animals than their natural habitat because they are guaranteed food and get to be gawked at all day. This Nature 2.0 is not better than the original, and it just goes to show how incredibly pretentious beings we are, that we think we can out-do nature, that we are doing these animals a favor. She claims that zoos are a place to escape “the crowded, noisy, stressful, morally ambiguous world where humans tend to congregate,” but the irony is that same phrase can be used to describe most zoos, that “zoo” is a common word to describe mayhem, bedlam, pandemonium. Picture a zoo, hectic crowds of people herded through the intricate maze of this profit machine, a vendor at every corner, sweaty tourists bumping into you, trash and waste under foot. These euphemistically titled “wildlife parks” are regarded as a necessary staple in our communities because they have a couple quiet corners for you to relax and be alone with your own thoughts. However, while I have had a few peaceful moments to myself to appreciate the majesty of a lion, or perhaps the beauty of a peacock, most of my experiences have been a little less magical--for example, interrupted by the shoving of an incoming sixth grade class banging on the glass of the fish tanks. Zoos are over-romanticized; we act like we’re completely enlightened after having visited them. We forget that we may have had fun, but we didn’t really learn anything about nature. We forget that zoos have no place in education, at least not how they are functioning now. And if you want a “parklike” setting where you can achieve “mindfulness,” go to a park.

Now, some would mention groups like the AZA (Association of Zoos and Aquariums) or the WAZA (World Association of Zoos and Aquariums--a completely separate entity) or even local organizations like the Chicago Zoological Society whose missions are to keep zoos conserving, protecting, and educating. Said persons might add that organizations like the AZA have “educational advisors” who essentially design the informational parts of most zoos, ensuring the utmost educational value. They could also continue with the fact that the WAZA is launching a new eLearning service that would give members access to online courses with subject matters ranging from Animal Care to Volunteer Training to Horticulture, all in the name of improvement. While I appreciate their efforts, the folks at the AZA have not been as saintly as you might think. Marc Bekoff, Ph.D, a former professor of Ecology and Evolutionary Biology , states, “ Major zoos also have had serious problems but have continued to receive accreditation from the Association of Zoos and Aquariums” (Psychology Today 13 April 2010). The AZA clearly doesn’t enforce its code of ethics very strictly. A study conducted by the AZA concluded that visiting a zoo could have overall positive effects on your life. Lori Marino and her colleagues decided to assess the claims of this study on why zoos matter. The published, peer-reviewed study found “at least six major threats to methodological validity” that undermined the AZA (Marino). The abstract of the study concludes with, “There remains no compelling evidence for the claim that zoos and aquariums promote attitude change, education, or interest in conservation in visitors” (Marino). The study by Professor Marino and her colleagues clearly shows that zoos fall short on their claims that seeing animals in these facilities has long-term positive effects on people's attitudes toward other animals. Therefore, we need to revisit the very reasons why zoos exist, how they dug so deep in our culture.

We are attracted to zoos because they offer a convenient way to feel more connected to the world, which is disturbing. This is not disturbing in and of itself, but it is deeply disconcerting that humans capture and hold animals just so they can make themselves feel a little less alone in the world. It is comparable to a kidnapper keeping someone in their basement just to have around in case they get lonely. “Why We Love Zoos” includes a study about zoo-goers’ “exterior gazing,” that they were “focusing on the lives of other creatures to dispel the usual mind theaters that plague us.” In simple terms, this means the zoo served as a distraction. These people went to the zoo for the same reason they watch television or play online poker: entertainment. Isn’t it sick that for these people, going to the zoo was equivalent to watching an episode of Jersey Shore? This makes sense to me, though. People watch reality television for the same reason they people-watch, and the same reason they visit zoos: to better and feel better about themselves. Researchers at the University of Arizona Biely, Morgan, Nabi, and Stitt conducted a study on the psychology behind reality television. Even though their results were varied, it was very clear the majority of viewers’ motives for watching was for some kind of “companionship” (Biely 303). You watch other people, study their behavior, learn from their mistakes. Somehow, you also develop a connection with strangers just from learning about their lives. This is why reality television has become such a success and why zoos still make profits. People find themselves connecting with animals, finding similarities between them, parallels in their lives they had no clue existed, and this is what seems so inspiring about these wildlife parks. The reality, though, is that most of what you are experiencing is empathy. You feel their pain, because you know the animals must not be fully content in a tiny enclosure, or the more accurate term, cage. Ackerman states “what a lonely species we are...adopting companion animals, visiting parks and zoos to commune with other beasts,” implying that we are the only species to do such a thing, which is not true at all. Most other animals have interspecies friendships at some point in their lifetime. It is programmed into our brains to find companionship. The disturbing part is the methods in which we seek these connections in zoos--by force, abuse, oppression.

“Why We Love Zoos” includes a study that found inner city parents took their children to zoos to promote “family values” and inspire a “concern for animals.” This is exactly right, visiting a zoo should make children very concerned for animals--the animals in the zoo. Parents should think twice about what values zoos are teaching the next generation. We hide behind education as an excuse to keep zoos in our culture and visit them for deeply unsettling reasons. Zoos are nefarious in nature, now, but if we rethink them, reimagine them, actually bring into action the mission statements of all the wildlife conservation organizations already on the right path, maybe they can be “Gardens of Intelligence” once again. 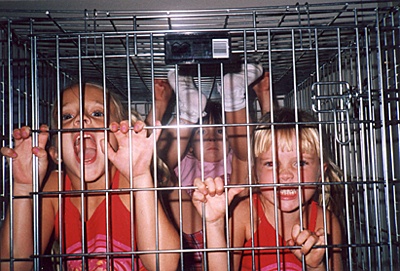 The author's comments:
not my best work--wrote it in a day for an assignment. I still think my point comes across, though, and it's an important one to think about in modern society.
Post a comment
Submit your own