Beaten Because of Bras? | Teen Ink

Beaten Because of Bras?

Last week, I was reading the news online when I came across the headline: "Somali Women Whipped For Wearing Bras." Needless to say, I was shocked, appalled, and seriously angry. How do people get off by inflicting pain on others because of clothing? What we wear is our choice and ours alone; no one else should have a say. These thoughts all rushed to my mind when first reading this article. But after I calmed down, I realized that this didn't happen in America; it was in Somalia; this changes everything.

I tried to forget it, but I kept imaging myself being publicly whipped for wearing a bra. So I wanted to know: Why did it happen? Why is this so bad? It shouldn't matter where we are in the world---the same rules should apply on this issue. Don't women deserve the right to dress themselves and feel comfortable?

But no matter how much I want this to be true, I know that in some places, it's not. Other countries have certain traditions or rules to adhere to, whether it be religion or culture or other things. I was curious about the topic, so I researched Somalia on the Internet.

For one, Somalia is located on the easternmost part of Africa, bordering the Indian Ocean. Actually, Somalia is the birthplace of Islam. For centuries, Islam has been perceived as a sacred religious institution. However, several of its followers have distorted and altered the teachings into their own interpretations. These people have convinced themselves and others, that what harmful acts they are doing, is what God would want.

The Somalia Islamists group, Al-Shabaab, is responsible for beating these women. In 2004, Al-Shabaab was formed after the loss of the Islamic Courts Union. The ICU was a group of Sharia courts who wanted to create a rival administration to the Transitional Federal Government---the Parliament of Somalia. In other words, the Al-Shabaab group was developed after the ICU failed to destroy Somalia's Parliament.

Al-Shabaab is the Youth Wing of the ICU; it's sort of like the "special forces." Al-Shabaab is radical and extreme. They are to blame for so many terrible things, such as abducting journalists, killing wounded soldiers, and harassing people. Al-Shabaab has also wreaked havoc twice in Mogadishu already this year. They carried out a suicide car bombing on an African army base in February, and now this whipping of women wearing bras.

It started out this way: Al-Shabaab sent gunmen into the streets of Mogadishu, looking for any women with a firm bust. Women were inspected to see if the firmness was natural, or from a bra. If found wearing a bra, the woman is ordered to remove it and shake out their breasts. Al-Shabaab’s reason for this act is that these women violated the Islamic law; wearing a bra is “deceptive.”

Al-Shabaab is a group dictatorship. They've already forbidden musical ringtones, movies, dancing at weddings, playing, and watching soccer. And now this? What point are they trying to make now? As of 2008, Somalia has topped the list of unstable nations; these countries are most at risk for failure rank by likelihood of collapse.

I’m seriously...at a loss for words. (I mean, obviously not, otherwise I’d stop typing.) But for one thing, I’m glad that this didn’t happen in America; I feel so relieved. I wish I could say the same for the women and girls of Mogadishu. I can’t imagine how they must feel, uncomfortable in the streets where gunmen are inspecting their underclothes. I hope soon that this chaos with the ICU will end soon. In the meantime, I pray for Somalia. 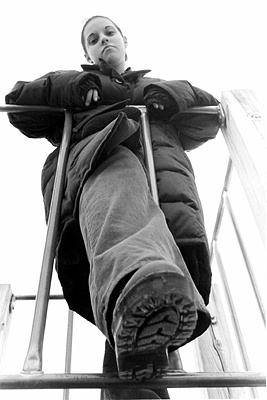 The author's comments:
When I was reading online, I came across this story, and I was upset. I was thinking about how things are different for other young women in other countries. This headline shocked me. How humiliating it must be for these women,to be inspected like that and in public! I hope that people will be aware of how it is in different countries, and just think, "What if this happened to you?"
Post a comment
Submit your own

View profile
First of all, welcome to Teenink! I noticed that you're new from your page. It's been a while since someone has commented on this article---my first one. I wasn't sure how it came across to others, but I'm glad you found it informative. Feel free to check out my other stuff and I look forward to reading yours as well.
wicked-souls BRONZE said...
on Apr. 14 2012 at 8:58 am
wicked-souls BRONZE, Brooklyn, New York
2 articles 0 photos 8 comments

Favorite Quote:
Nowadays people know the price of everything and the value of nothing.
-Oscar Wilde

View profile
Being raised by a Christian mother, and Muslim father, I find this article to be very informative and for the most part accurate (except for the part where you said Somalia is where Islam originated). The few muslims I know obviously don't have this distorted image of what the Islamic religin should be, but for example, they don't listen to music because they believe it will distract them from what's important, God. Also, even though it is done in a much less strict and harmful enviroment, they often do supress woman's right. For example, a muslim man I've had the displeasure of meeting did not allow his wife to leave the house to buy groceries because he didn't want people to see his wife. Although his belief was altered now that he has adapted to life in America, I was appauled to hear that somebody could be so strict, and the woman was so understanding of this!
beautifulspirit PLATINUM said...
on Feb. 9 2012 at 10:12 am
beautifulspirit PLATINUM, Alpharetta, Georgia
35 articles 0 photos 1398 comments

View profile
Sorry I didn't say this before. Thank you both for your feedback on my article~
NorthernWriter said...
on May. 30 2010 at 6:45 pm
NorthernWriter, Fargo, North Dakota
0 articles 0 photos 326 comments

View profile
sorry for the long wait, but it is not against the religion of Islam for a woman to wear a bra. A bra conceals a woman's chest and keeps it from being in everyone's face. This group is not only ridiculous but before they starting telling others how to practice a religion, they should learn how to pracitice it themselves. As a Muslim, I find this disgusting and just plain awful. I am not blaming you because I did research this and it turns out, this truly did happen.
beautifulspirit PLATINUM said...
on Nov. 18 2009 at 1:01 pm
beautifulspirit PLATINUM, Alpharetta, Georgia
35 articles 0 photos 1398 comments

View profile
Okay. Actually, Islam's origin can be traced all the way back to the seventh century in Saudi Arabia. So, the birth of Islam is opposite the Red Sea; Somalian merchants/sailors who lived in the Arabian Peninsula brought Islam over to their own country.
NorthernWriter said...
on Nov. 14 2009 at 11:02 pm
NorthernWriter, Fargo, North Dakota
0 articles 0 photos 326 comments

View profile
First of all, Somalia is not the birthplace of Islam. That is not true. Second...i don't believe this.
CaseyLeigh PLATINUM said...
on Nov. 6 2009 at 6:16 pm
CaseyLeigh PLATINUM, Moraga, California
31 articles 6 photos 137 comments

View profile
Definitely an interesting and eye-opening article, with an original topic. The italics are somewhat distracting, but overall, well done. :]