Many people, especiallyduring this difficult time, have said that the government is corrupt. Many kidsin my class have said that they do not trust our government and don't likePresident Bush. Some don't stand for the Pledge of Allegiance, saying it's forcedpatriotism. Americans trash George W. Bush, including some fellow politicians whofeel he is not doing the diplomatic "thing" concerning the war.

Well, I for one am sick of it. I think this country is great. I stand upfor the Pledge. I praise George Bush for his fearlessness. I know that I wouldnot be able to do this if I were in his position. Most people wouldn't and oftenforget that the President isn't the only one making these decisions about war andproblems in the Middle East. So why don't people criticize them? Because theydon't know enough. I was dumbfounded when four kids from my homeroom refused tostand for the Pledge and then bashed it. Some ask why we show all this patriotismafter September 11 and not before. Well, it's simple: you never know how much youlove something until it's gone.

People ask why all the bloodshed forfreedom. I don't know about other Americans, but I enjoy being free. The kids whodon't stand for the Pledge and bash the government should realize they are luckythat they can say and do so. In another country you could be tortured or killed.And why don't you get killed when you bash our government? Here, you have a rightto speak against your government.

So I ask my fellow Americans, thinkbefore you bash a government that allows you to believe what you want to believe.God bless America. 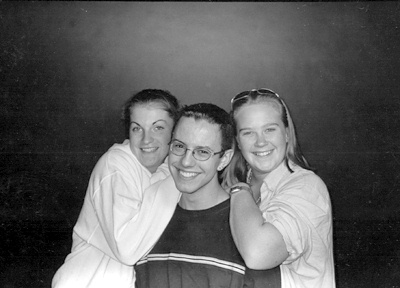 Favorite Quote:
Standing between us and evil.He'll defend to the very last shell.Carnage all around but still unflinching gun blazing as he fell.The brave soldier﻿ once at Heavens gate Yells out."One more soldier reporting sir,and I believe I've served enough time in hell.

View profile
I think you are right on the dot. I stand up proudly with my hand over my heart when we speak the pledge. I'm always fast to defend our troops and America. I love it here and i'm glad I have the right to live and be free here. For those who complain about war. Freedom has never been free. Remeber that. War happens.
sunhine_girl1819 said...
on Sep. 18 2008 at 2:03 am
Okay. I love your patriotism. i agree with you when you said that many americans are ungrateful for a goverment that gives us the right to speak up and say what we believe in. in my opinion- yes! our goverment is screwed, but i woldn't want t live anywhere else.