Stormy nights can bring things unexpected-but never as unexpected as best friends who have broken apart since an untimely, mysterious death in the quaint, provincial town of Wolfwater in New Jersey.

Victoria and Spencer were just on their way to Spencer's Nonna when they meet ex-best-friend Alice dumped and crying in the middle of the road; Wesley's car breaks down in the middle of nowhere, requiring the assistance of the mechanic Nicholas.

All their problems and disputes are thrown aside as easily as snapping a finger when their lives are turned and shaken by a car accident--and an old, Victorian estate, home to the late Moonsons. An estate hunted by brave mobs and feared by common melees.

As they juggle their personal problems, more alarming ones surface. Spencer goes missing, Alice learns that her mother may have kept more secrets than she knew, and it is up to the other three to figure out why more people end up dead in the mansion, in addition to the many that is already dead.

Little do they know, they have chosen the wrong option when they braced themselves to venture beyond the polished walls of the Moonson estate. 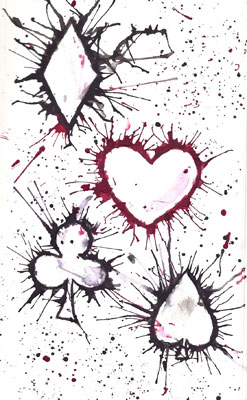 Favorite Quote:
"You are your own person. Nobody can change that. If they do change you, You are no longer yourself. They cannot make you better or smarter or better looking. They can only make you worse."-Natalie (myself)

Favorite Quote:
"how wonderful it is that nobody has to wait a single moment before starting to improve the world"

Favorite Quote:
"Fear is only in the mind"

Favorite Quote:
- "The way I see it if you want the rainbow... you have to put up with the rain."
- Freedom Is Cheated
- "Make sure the unicorn isn't watching."