McDonald’s is one of the most popular fast-food restaurants in America and the rest of the world. They have thousands of fast-food chains around the world and millions of regular consumers. The first McDonald’s restaurant was built in 1955 in Illinois and the rest is history.


Albania, a small country in eastern Europe, does not have McDonalds or any other famous international fast food chains like Burger King or Subway. Instead, they have Kolonat, a complete rip-off of the actual restaurant. Just like McDonalds has the big golden arches that make up an “M”, Kolonat has a large golden “K” made up of nothing else except french fries.  The letter “K” is written in large font and is in front of the name; just like McDonald's. The colors of the restaurant are also very similar; red, white, and yellow. Could this be a coincidence?


Fortunately, I have eaten at both of the restaurants. The food is more or less the same (Kolonat might have less quality food). McDonald’s does, in fact, have a rather cheap food menu that is meant to be affordable for everyone. The prices range from $1.50 to $5.50, so everyone can easily buy even the simplest hamburger. The same thing goes for Kolonat. Most, if not all of their products on their menu, are under 10 dollars (1000 leke).


The only different thing about the two menus, is that Kolonat has more to offer. Unlike McDonald’s, Kolonat also offers many types of pizzas (which I believe is one of the most popular product according to customers), and they also sell spaghetti and pasta.


What I find most amusing about all of this are the two mottos of the restaurants. McDonald’s has the world famous “I’m lovin’ it” motto which was sung by Justin Timberlake during all of the commercials and is on every poster and restaurant. Kolonat, on the other hand, has the motto “I like it.” Do you see any similarities?


Now, some people could possibly find an argument to all of this and debate whether Kolonat is at all similar  to McDonald’s, but it can’t be a coincidence that everything is pretty much the same for both restaurants. They sell almost the exact same food, except that Kolonat sells more products like pizzas and pasta. This is just a matter of opinion...of thousands of people. 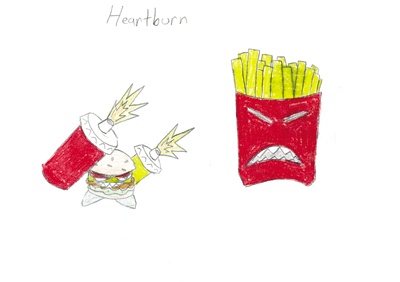 Favorite Quote:
"We gain strength, and courage, and confidence by each experience in which we really stop to look fear in the face... we must do that which we think we cannot."
~ Eleanor Roosevelt ~