The Sport of Kings? | Teen Ink

The Sport of Kings?

Horses have always been and will always be a large part of my life. When I turned 15 I got my first horse. Even before my first horse, I rode and decided that horses were my niche. Being involved in the horse world I decided to learn about the different disciplines of riding, racing included. While I do believe the sport of horse racing is unbelievably beautiful and a corner stone of American culture, I have wondered if the sport is worth the injuries and deaths it causes, to both the horses and the jockeys. I am aware of the horse related injuries and the stress that racing can put on the horses. What I don’t understand is why racing horse owners choose to submit their horses to that kind of physical stress.

Horse racing is one of the world’s oldest sports. Over the years it has consistently drawn in spectators with its gambling, beauty, and intensity. But what people don’t realize that there are some ethical issues concerning the sport of horse racing. Most people who aren’t racing enthusiasts tend only to watch one race a year, the Kentucky Derby. The horse world isn’t exceptionally large and people who lack equine knowledge do not take into consideration the technical safety aspects of horse racing. Horses that participate in high stakes racing like the Triple Crown or others like it are raced when they are quite young. Two years old to be exact. At this point in the horse’s life, they are still considered to be physically immature and have not reached their physical potential. Even though race horse owners know this they still continue to race, knowing that it could cause irreparable damage to the horse. Brenda Nelson, a writer for Sportales, explains this well when she stated, “There are races for 2-year-olds. In an eager attempt to get these youngsters on the track they are saddled and ridden as yearlings, something not done in any other discipline. Many Warmbloods, horses commonly used for jumping, are not even ridden until four or five years of age, much less pushed to their maximum capacity,”. Think about it. Race horses can weight 1000-1500 pounds and are supported by legs thinner than that of a human. Combine this with 35-40 mile an hour speeds and it can equal disaster. Racing too young or even in general can cause ligament damage, bowed tendons, bone chips, fractures, EIPH (Exercise Induced Pulmonary Hemorrhaging) and broken bones that often lead to death. In fact, race horse injuries are the third leading death of horses, with colic as number one and old age as number two. The United States also has one of the worst mortality rates for thoroughbreds. Approximately, 700 to 800 race horses die every year. According to New York Times, “Twenty-four horses a week die at race tracks around the country.”

This can be backed up by countless examples. Barbaro, an American racehorse and favorite, was racing in the 2006 Preakness Stakes when he shattered his hind leg in twenty places. After months of attempted recovery, he succumbed to his injury and died. Another example of this was Eight Belles, a filly, at the 2008 Kentucky Derby. Just before crossing the finish line both of her front ankles fractured. Her injury was so severe that she had to be euthanized immediately on the track. Race horse owners realize that the horses cannot keep up with the extensive racing schedules and physical stress. To combat fatigue and injuries, racing trainers and owners often subject their hopeful champions to drugs. Thousands, sometimes millions, of dollars are put into horses and owners will do anything to make the horse run faster. Steroids are in no way uncommon, and amphetamines, tranquilizers, and anti-inflammatories are also commonly used. An example of this would be Big Brown, the 2008 Kentucky Derby winner, whose trainer admitted to giving the winner anabolic steroids every month. Another drug that is extremely common and often prescribed by a vet is phenylbutazone, or “bute”, which is the equivalent to aspirin for horses. When a horse sustains an injury, bute is often prescribed to them to help ease the pain and reduce inflammation. Unfortunately, this drug can be abused. If a race horse sustains an injury some trainers choose to feed their racehorse a large amount of bute, therefore erasing any pain and letting the horse perform normally. But the stress of racing will still do damage to the injury, making it much worse and debilitating the horse.

So why then do people continue to let racehorses be abused as they are right now? It’s a social staple in the U.S. Every year, thousands of people flock to the races, spending thousands of dollars on gambling and not considering the horse’s state of health. Nor do they consider the future of the race horses. Because of the physical stress put on the animals many have lifelong health problems that keep them from performing like a normal horse. This also makes it harder for them to be adopted after their career. Thousands of racehorses who don’t become champions are neglected, abused, or sold to slaughter. Not all of them find good homes. The abuse of horses, whether they are racing or not, should be considered the same as animal abuse, which many of us consider only to be domestic animals. Animal abuse charges can include fines and time in jail. Race horses are often overlooked and considered to live an exciting and healthy life but this is not the case.

So am I saying that horse racing should stop completely? No, but there should be more regulations and close monitoring. This way racing associations and the tracks hosting the races may have a better handle on the drug use that is often overlooked. There should also be regulations concerning the topic of age. Any veterinarian will tell you that the horses raced in high stakes races are undeveloped and not physically mature, almost 100% guaranteeing that there will be some type of damage that will affect the horse in the future. Horse racing is no longer about the love of racing or horses. Greed has infiltrated every aspect of this multi-billion dollar industry, and until people take notice and demand a change, horses and jockeys will continue to be injured and killed. 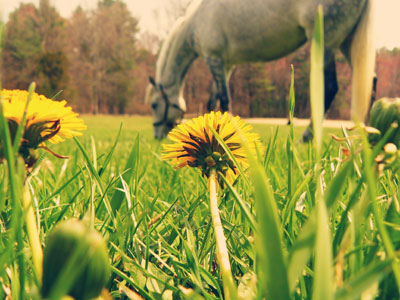 The author's comments:
Many of us don't consider the dark side to horse racing. Hopefully this will shed some light on the subject.
Post a comment
Submit your own